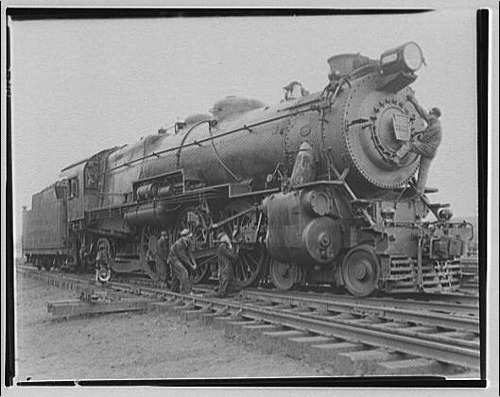 On this day in 1883, American and Canadian railroads began using four continental time zones. This stemmed from schedulers’ confusion transporting passengers across thousands of local times. Most towns in the United States had their own local times based on “high noon” when the sun reached its highest point in the sky.
The railroad companies created the new time coding system without assistance from the federal government. Most Americans and Canadians embraced the time zones since railroads were the primary link between the two countries. Congress did not officially adopt the time zones until 1918 under the Interstate Commerce Commission.
Check out American Experience’s “Streamliners” timeline of significant events related to the development of American railroads. 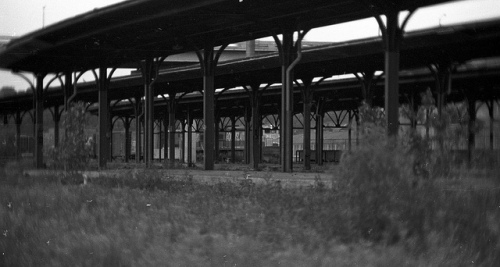 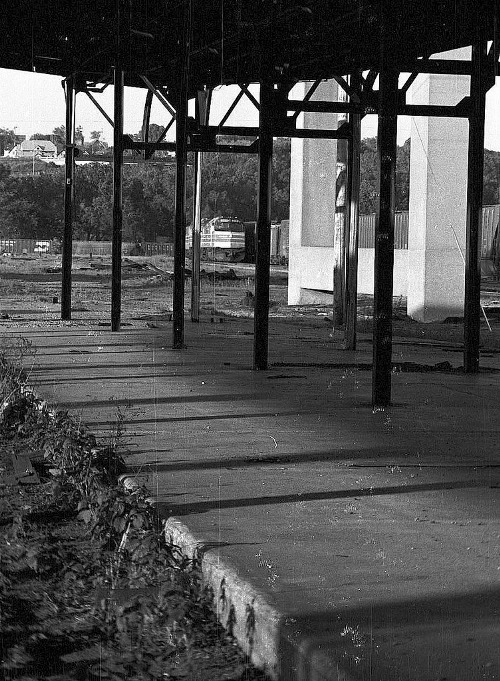 Passenger rail service officially came to an end in downtown St. Paul on April 30, 1971. The last train, the Burlington Afternoon Zephyr, left the depot that evening, bound for Minneapolis. Amtrak launched its passenger service to the Twin Cities the next day, bypassing downtown St. Paul. These photos, taken seven years after the fact, come from a wonderful collection by Kurt Haubrich. 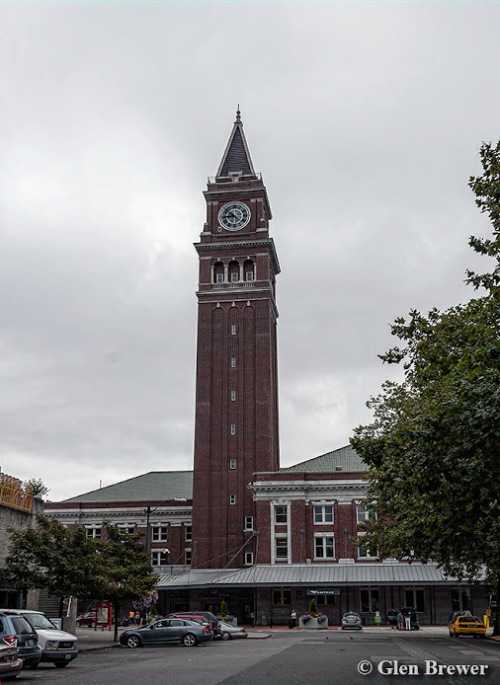 King Street Station is a train station in Seattle, Washington, United States. Located between South King and South Jackson streets and Second and Fourth Avenues South in the Pioneer Square neighbourhood of Seattle, the station is just south of downtown. Built between 1904 and 1906, it served the Great Northern Railway and Northern Pacific Railway from its grand opening on May 10, 1906, until the creation of Amtrak (the National Railroad Passenger Corporation) on May 1, 1971. The station was designed by the St. Paul, Minnesota architectural firm of Charles A. Reed and Allen H. Stem, who were later associate designers for the New York Central Railroad’s Grand Central Terminal in New York City. King Street Station was Seattle’s primary train terminal until the construction of the adjacent Oregon & Washington Depot, later named Union Station, in 1911. King Street Station was added to the National Register of Historic Places and the Washington Heritage Register in 1973.
Since the early 1990s the station was in various states of repair to undo remodels done during the middle of the Twentieth Century to “modernize” the facility, including the restoration of the elegant main waiting room. King Street Station was purchased by the City of Seattle in 2008 for $10 and, with enough funds finally in place, the restoration was finally completed in 2013. 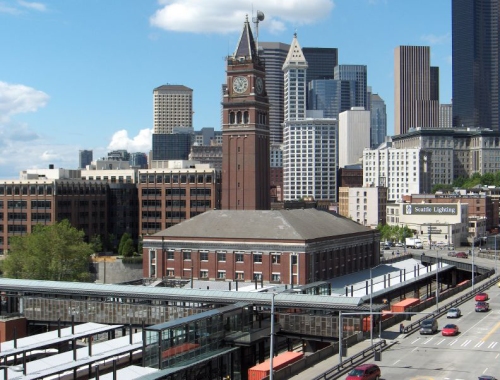 This file is licensed under the Creative Commons Attribution 2.0 Generic license. felix_s

Posted on August 7, 2014 | 1 comment
Seth Thomas Number 19, eight-day regulator with glass double-vial mercury pendulum at the California State Railroad Museum in Sacramento.The Santa Fe Time Department had charge of many of these excellent clocks for very accurate timekeeping. I looked at two, hanging side by side in the dispatcher’s office in Temple, Texas about 50 years ago when they were being sold off. I really wanted one, but even then the price tag was $3,500.

The mercury pendulum was used on some very accurate clocks for temperature compensation (as ambient temperature rose, the pendulum rod expanded, but so did the mercury level).

Much more on railroad timekeeping at http://RailroadGloryDays.com/RailroadTime

It wouldn’t look too bad in the Chasewater Railway Museum either!

Streets ahead – Including shunting at Norton Junction – Brownhills Bob’s Page 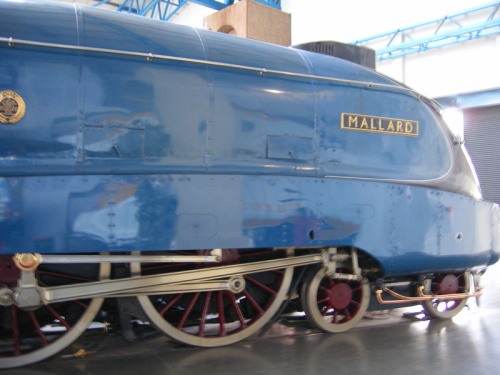 In 1804, when Richard Trevithick’s pioneering locomotive made its journey along the Penydarren tramroad, its inventor operated the controls by walking along the track in front of it.  In a letter the following day, Trevithick recorded that ‘The train while working went nearly five miles per hour’ no more than a brisk walking pace.  This was perhaps the first ever steam speed record.

When ‘Locomotion’ ran from Shildon to Stockton 21 years later, it could only outdistance riders on horseback because marshes alongside the line impeded the horses.  At full speed the locomotive could just manage 15 mph.

At the Rainhill Trials in 1829, Stephenson’s ‘Rocket’ achieved 29 mph.  This was eclipsed in tragic circumstances the following year, when ‘Northumbrian’ reached 36 mph as it conveyed the dying MP William Huskinson to Eccles after he had been run over by ‘Rocket’ at Parkside.

The contestants’ achievements at Rainhill were carefully recorded.  Later it became difficult to establish accurate claims as speeds increased and railways spread throughout the world.

Unlike world speed records on land and in the air, there are no international standards for railways.  For example, the effect of a strong following wind has never been taken into account and on almost every occasion a record breaking train was appreciably assisted by gravity.  This applies equally to the TGV’s present world record of 320.2 mph as to ‘Mallard’s’ 126 mph in 1938.

Speed records were usually obtained by stop-watch measurements from mile or kilometre posts.  In some cases the speed claimed at the time was later adjusted after the information had been examined further.

The performance of the Milwaukee Road’s Hiawatha expresses in the 1930s was accurately measured and the 112 mph record by the streamlined Atlantic N0. 2 in 1925 was adequately proved.

During the 1930s, there was considerable rivalry over maximum speeds between the LNER and the LMS.  In 1937, the LMS claimed a maximum of 114 mph on the press run of their Coronation Scot streamliner train.  This would have beaten ‘Silver Link’s’ record but the figure was not confirmed by a number of experienced recorders on the train.  This left ‘Coronation’ sharing the record of 112 mph with the LNER A4 and Milwaukee Atlantic. 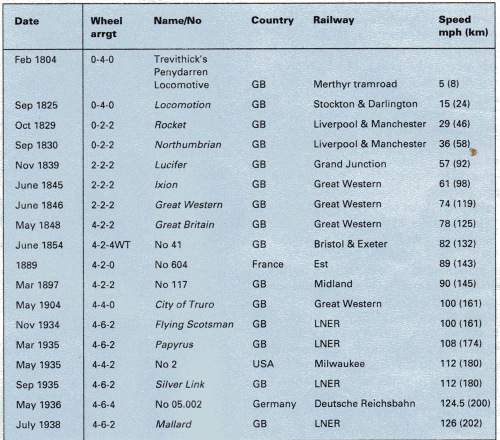 All the fully authenticated world records achieved by steam locomotives are the maximum speed attained, rather than averages.  Some top speeds, like ‘Mallards’ were sustained only for a few yards. 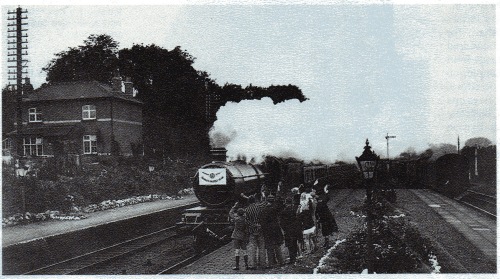 Although a record of 74 mph was achieved by a GWR locomotive in 1846, it was not until 1931 that the company ran trains at such speeds in everyday service.  The Cheltenham Flyer was the first train in the history of railways to average regularly over 70 mph.  On 14 September 1931, the express sweeps through Tilehurst, Berkshire on its way to London.