Dave Doman brought his father’s ashes to Chasewater Railway for one last journey on a steam locomotive.  He travelled on the footplate of the Barclay Loco ‘Coln McAndrew’ driven by Keith Sargeant.

The photos at the end of the video show the train ready to leave Brownhills West, Mick’s return from his trip and passed back to son Dave, and one final visit to the footplate of Hawthorn Leslie engine, ‘Asbestos’.

Brighton Road station, Birmingham, was opened on 1 November 1875, and was just under 3 miles from the Birmingham & Gloucester Railway’s junction with the London & Birmingham Railway. A Midland Railway train hauled by a Johnson 0-6-0 No.3694 passes the timber platform during the second decade of the last century.

Originally conceived to link Birmingham with docks at Gloucester, a lengthy debate on the route resulted in a line (authorised on 22 April 1836) which avoided Tewkesbury and Worcester, though public pressure forced a diversion to Cheltenham. Its main bugbear was the Lickey Incline, 2.5 miles at 1 in 37.5 – built as an economy, it kept the Company in debt for all of its independent life. The line opened from Cheltenham to Bromsgrove on 24 June 1840, Bromsgrove to Cofton on 17 September, Cheltenham – Gloucester on 4 November, Cofton – Camp Hill on 17 December, and to Curzon Street Birmingham, on 16 August 1841. It was leased by the Midland Railway with effect from 1 July 1845, which absorbed the Company on 3 August 1846.

Incorporated on 31 July 1871 to build south from Albion Wharf to King’s Norton, with a junction with the ex-Birmingham & Gloucester Railway, the 6.75-mile single track was vested in the Midland Railway from 1 July 1875. It was opened on 3 April 1876, and widened and extended following authority of 18 July 1881; Midland Railway expresses were diverted along it from 1 October 1885. In 1892 a triangular junction was built at Lifford (authorised on 24 July 1888), to make a circular suburban service possible. 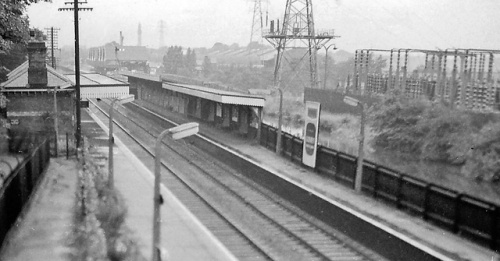 The original Southern Belle was a streamlined passenger train that ran between Kansas City and New Orleans from 1940 until 1969. Thanks to the Kansas City Southern, a new, beautifully-restored Southern Belle streamliner train is now used for business meetings, public affairs and charitable events.

Before it was merged into the Union Pacific in 1982, the Missouri Pacific was a vast railroad system operating in eleven states. The UP has honored the MP with a beautiful Heritage locomotive.

Posted on December 4, 2014 | Leave a comment
Former Denver & Rio Grande Western, K-37 class, 2-8-2 No. 491 awaits its next assignment pulling ‘The Polar Express.’ She is on the ready track beside the roundhouse at the Colorado Railroad Museum: http://RailroadGloryDays.com/CRRM/index2.html#transporttuesday #railfans #SteamySunday #RailwayWednesday

The first cable car ran in San Francisco in 1873, said to be a solution of the hardship hourses had pulling cars up hills such as the one ahead in the photo (Nob Hill) on the California Street Cable line. Soon similar lines were popular all across the US. Most however, were quickly replace with electric street cars when they became practical. San Francisco’s survived because of the steepness of the hills and later, the resistance of its citizens to the removal of what had become an icon for the city.#transporttuesday #railfans #SteamySunday #RailwayWednesday

New story on Railroad Glory Days: Denver Union Station Renewal,
The good, the bad and the ugly.Read it here: http://Railroadglorydays.com/DenverUnionStation 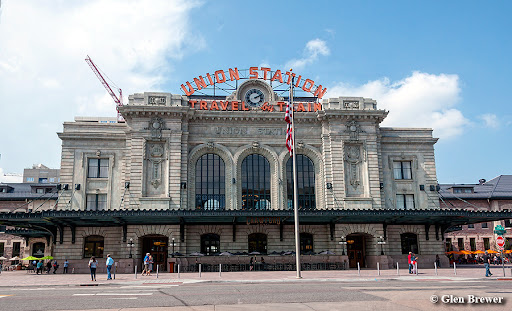 Cambridge – Bletchley line, which was closed on 1/1/68, view SW towards Bletchley (left), the connection to Bedford Midland Road being to the right. This station survived as a terminus until on 14/5/84 a replacement station was opened on the loop to Midland Road station and Bletchley trains then terminated there.
Date 4 June 1962  From geograph.org.uk  Author Ben Brooksbank

Licensed for reuse under the Creative Commons Attribution-ShareAlike 2.0 license.

An 1836 plan for a line between Cambridge and the London & Birmingham Railway via Bedford was dropped, but in 1844 George Stephenson visited Bedford to discuss a branch which, when authorised on 30 June 1845 and opened on 17 November 1846, was a line from Bletchley to Bedford. It was built by the London & Birmingham Railway, and absorbed by the London & North Western Railway on completion as provided for by the authorising Act, though the Company was not dissolved until 21 July 1879. It became the basis for the Bedford & Cambridge Railway. 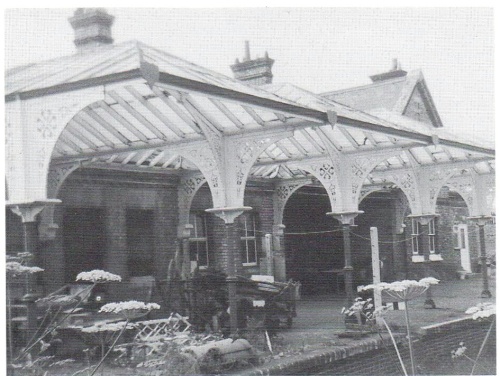 The fine Midland-type canopy of the Bedford & Cambridge Railway at Potton, Beds. When this picture was taken, in July 1987, restoration was in hand with a view to use as a museum

Incorporated on 6 August 1869 as a 29.5-mile line between the two towns, the route used the track-bed of the Sandy & Potton Railway which the Company bought out. Opinions differ on the date of opening, some citing 1 August 1862, others October of that year. The Company had close ties with the London & North Western Railway, with which Working Agreements were made under an Act of 23 June 1864, and which absorbed it on 5 July 1865. The line closed to passengers on 1 January 1968.

Disused Stations:Millbrook Station
http://www.disused-stations.org.uk
The attractive blue paviours were also used at a number of stations on the Bedford and Cambridge Railway.

Incorporated on 20 May 1851 to build between the two towns, the junction with the Chester & Holyhead Railway, which was authorised to work the line, was actually a Menai Bridge. It was an 8.5 single line, with a one-mile branch to Port Dinorwic (Y Felinheli), which opened on 1 March 1852 for goods. The line opened throughout for passengers on 1 July and for goods on 10 August. Agreement to lease the line to the Chester & Holyhead Railway for 999 years was made with effect from 1 July 1852, but the Company was instead transferred by an Act on 10 July 1854; dissolution was delayed until 15 July 1867. The line was doubled in 1872, re-singled in 1966, and closed to goods on 4 August 1969, though there was a respite when Caernarfon became a temporary freight terminal during the rebuilding of the Britannia Bridge in 1970-72. 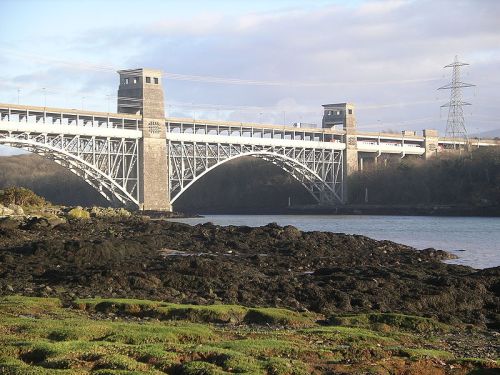 Britannia Bridge is a bridge across the Menai Strait between the island of Anglesey and the mainland of Wales. It was originally designed and built by Robert Stephenson as a tubular bridge of wrought iron rectangular box-section spans for carrying rail traffic. Following a fire in 1970 it was rebuilt as a two-tier steel truss arch bridge, carrying both road and rail traffic.

Caernarvon railway station was a station on the former Bangor and Carnarvon Railway between Caernarfon, Gwynedd and Menai Suspension Bridge near Bangor. The station was closed to all traffic in January 1972. The station has since been demolished and the site redeveloped. 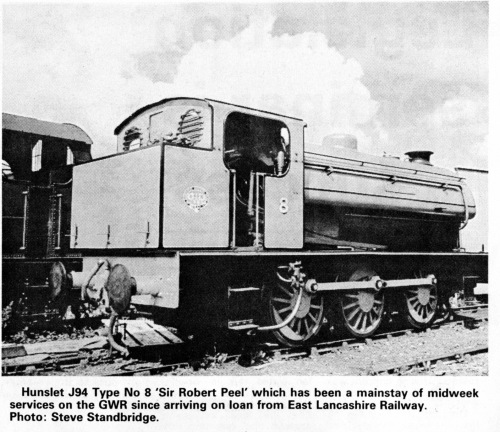 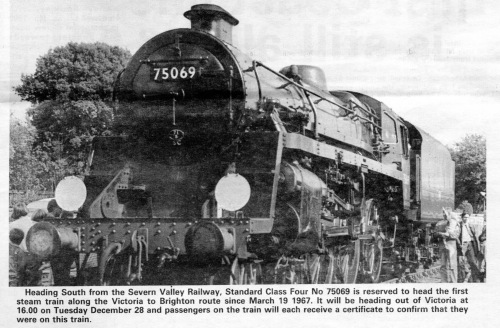 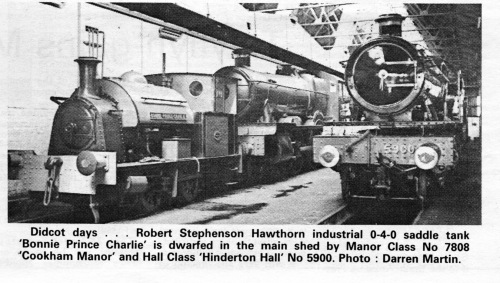 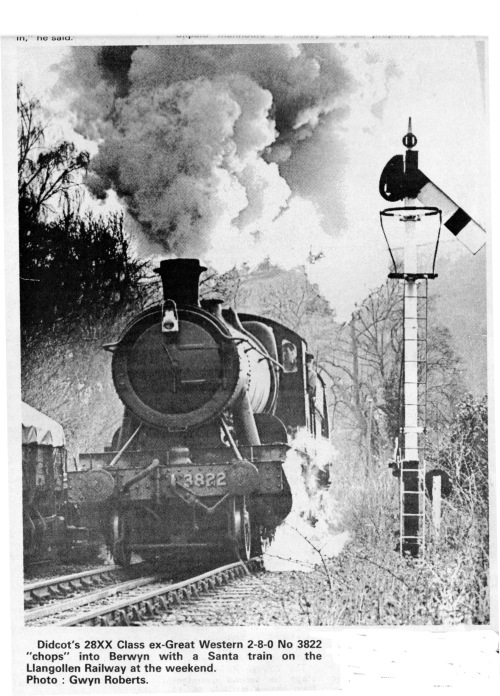 Posted on November 25, 2014 | Leave a comment
In 1999 1079 is at Barron Falls Station during its climb up the range to Kuranda in tropical North Queensland.This was the first time a mainline loco worked the line as the track was in the process of being upgraded.

The Barron Falls (Aboriginal: Bibhoora) is a steep tiered cascade waterfall on the Barron River located where the river descends from the Atherton Tablelands to the Cairns coastal plain, in Queensland, Australia.

Date 27 January 2005 Source  Wikipedia
Author  Ashlsimm  Permission  (Reusing this file)
The copyright holder of this file, Ash Simmons, allows anyone to use it for any purpose, provided that the copyright holder is properly attributed. Redistribution, derivative work, commercial use, and all other use is permitted. 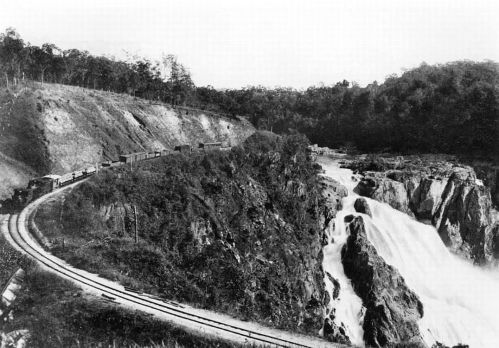 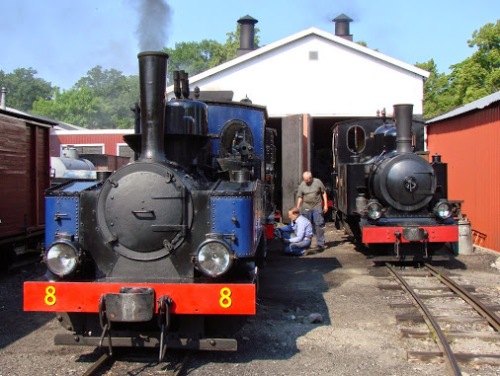