About time for another Bits and Pieces!

From Chasewater News January 1991A 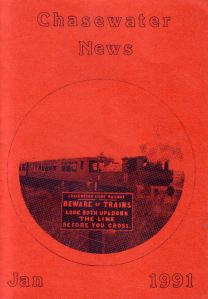 At the end of this, another, year we have made further modest progress on our railway.  As yet, the proposed platform at Willow Vale has not been built, but only because a pre-fabricated concrete one, well worth waiting for, has been acquired and awaits removal to Chasewater.

The fact that we have run for the whole year with only one steam loco is in some ways a disappointment, but on the other hand it does show that our engineering standards are as good as anyone’s with no failures having occurred.

With the main line steadily being extended towards the causeway, carriage and wagon restoration proceeding at a pace not seen at Chasewater for many years, and the station site and line in general becoming tidier and more businesslike by the week, 1991 could be the year when we do finally expand and prosper.

No.4 Asbestos – Progress on this loco is still very slow and as a result it is likely to be well into next year before it steams again.  The boiler and firebox are slowly being cleaned for inspection and following removal of the firebox lagging, which left a lot of mess, the motion has been thoroughly cleaned. 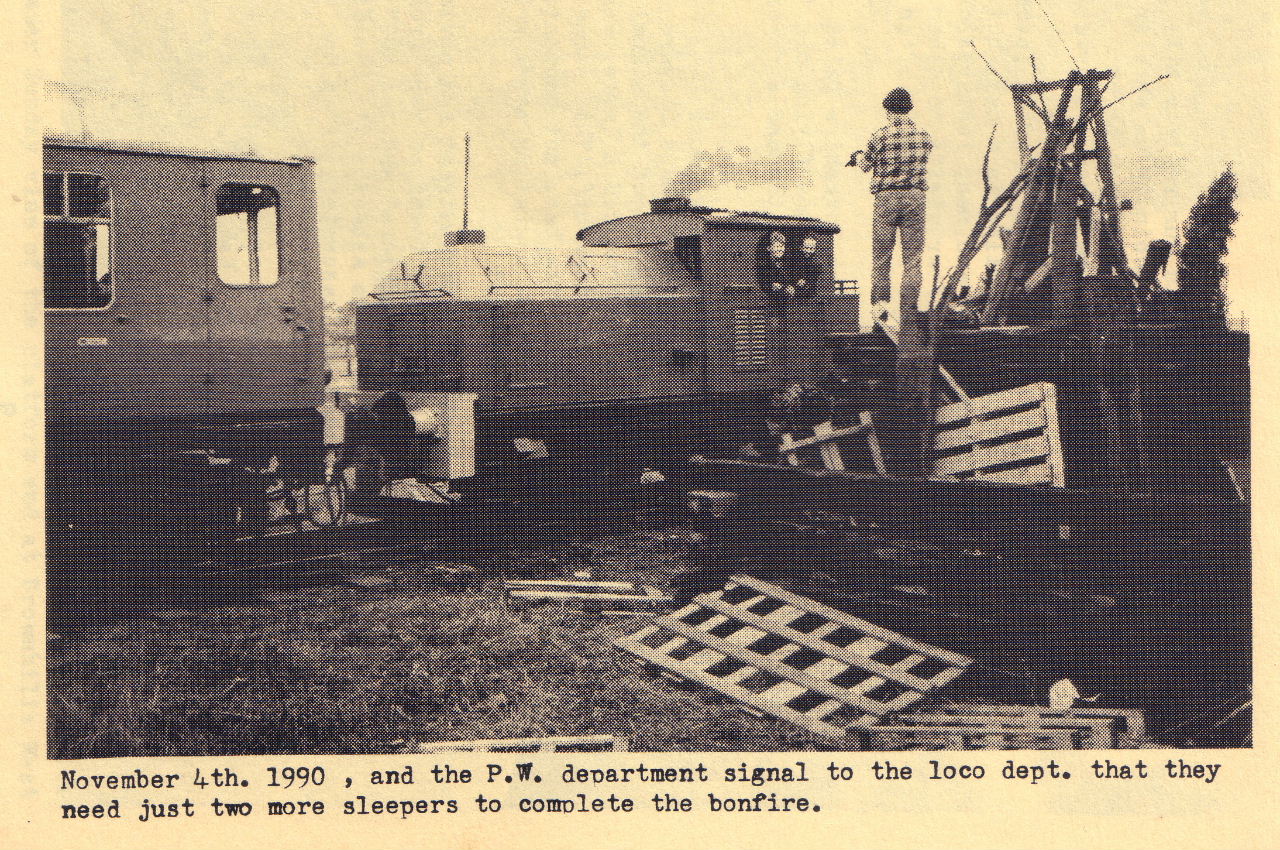 No.5 Sentinel – This is still the line’s only working steam loco and as such will work all the Christmas and New Year trains.  It was painted in camouflage as WD 79632 for the military weekend in September and is now in red undercoat prior to being repainted in its original gasworks red livery.

A number of outstanding minor repairs have recently been carried out, including fitment of a new blower pipe and firing chute, re-machining of a leaking clack shut off valve, and rectification of an engine oil pressure problem followed by an engine oil change.  The loco will shortly be fitted with a new fire grate to replace the rapidly disintegrating one currently held in place with a piece of angle iron secured to the sander pipe by fencing wire.

No.2 Lion – This loco is currently being fitted with sliding cab shutters and is likely to be hydraulic tested at the same time as Asbestos.  The saddle tank has been sent away for repair by contractors and should return shortly in pristine condition.

S100 – The major work being carried out on this loco is still the construction of a machine for grinding the hornguides, which posed more problems than had originally been anticipated.

No.7  Ruston – This loco is still in good running order although there was a minor mishap in July.  After its having stood unused for a number of weeks, the engine bent a pushrod during start-up.  Further investigation revealed that one of the fuel elements in the injection pump was also seized.  Repairs were affected fairly quickly and the engine appears to start more easily than it has for a long while.

No.9 Fowler – This loco is now running reliably and sharing shunting duties with No.7

Smith Rodley 5 ton crane – This vehicle has received a lot of attention recently in preparation for forthcoming work on the track.  The bodywork is being repaired with new windows and a complete repaint.  Work is also being carried out to repair the wooden floor and fit a guard around the open gearing in the cab.

A prefabricated concrete platform has been acquired from the Severn Valley Railway and will shortly be brought to Chasewater.  This is obviously ideal for Willow Vale Halt and will be far superior to the sleeper built affair originally proposed.

Work has continued on extension of the track past Willow Vale in addition to maintenance of the existing running line.  The increased number of working members mentioned in the last magazine seems to have been more than maintained to the extent that we are handling the 45ft and 60ft rails with relative ease.  Unfortunately the overhead power lines which pass over this section of line preclude the use of the crane for quite a distance either side.

Activities in this department have continued to increase so that there are currently a number of historic coaches and even wagons being worked on, as follows:

Midland four wheel passenger brake – Following extensive research, this vehicle is being restored to its original Midland Railway condition.  This has so far involved the removal of various post-MR additions, such as the internal partition, door and a bench seat.  Part of the roof is being rebuilt and various bad body panels renewed.

Manchester, Sheffield and Lincoln six wheel coach – Restoration of this vehicle has continued with renewal of broken windows and repair or replacement of damaged body panels.

Great Eastern six wheel passenger brake – Restoration of this long-abandoned vehicle has also recently commenced, initially with the stove, but also body panels and windows.  Hopefully the boiler from S100 which has blocked its movement for a number of years will soon be removed to the shed yard allowing the Great Eastern to be moved again.

Ex Cammel Laird hopper wagon – Having been little used since the hopper body was removed for scrap a number of years ago, this wagon has now been completely decked over with chequer plate to form a very sound flat wagon.  Minor repairs have also been carried out to the brake linkage and the whole thing painted in Tri0ang Big-Big Train bright blue.

Wooden five plank wagons – Both of the two examples of this type of wooden framed, wooden bodied wagons at Chasewater have badly deteriorated over the years.  At last a start has been made on one of these to renew all the rotten timbers in the floor and sides.

DMU Coaching stock – The Gloucester and Wickham trailer cars have remained coupled together as our passenger train throughout the season.  The left hand side of the Gloucester, which for some reason always seems to be more susceptible to body rot than the other, has received a few more patch repairs and a repaint.

The Wickham power car has remained in use as the station buffet.  However, when the new portacabin is opened for business, this coach could re-enter passenger service, steam hauled, or even under its own power.

New Acquisition – One of our members has just purchased from BR via Tyseley diesel depot, a DMU centre car.  Full details are not yet available, although it is No.59444, asbestos-free, in excellent condition and until very recently running on BR.  Further details, and hopefully an article, will appear in the next magazine.  This of course makes possible some very interesting train formations and raises the question ‘will we shortly be needing longer platforms?’

General News From The Line

A large portacabin has been acquired and will be put next to the booking office, and when fitted out will become the station buffet.  Mains power will be provided from the newly rewired site supply and it is rumoured that running water will also be plumbed in. 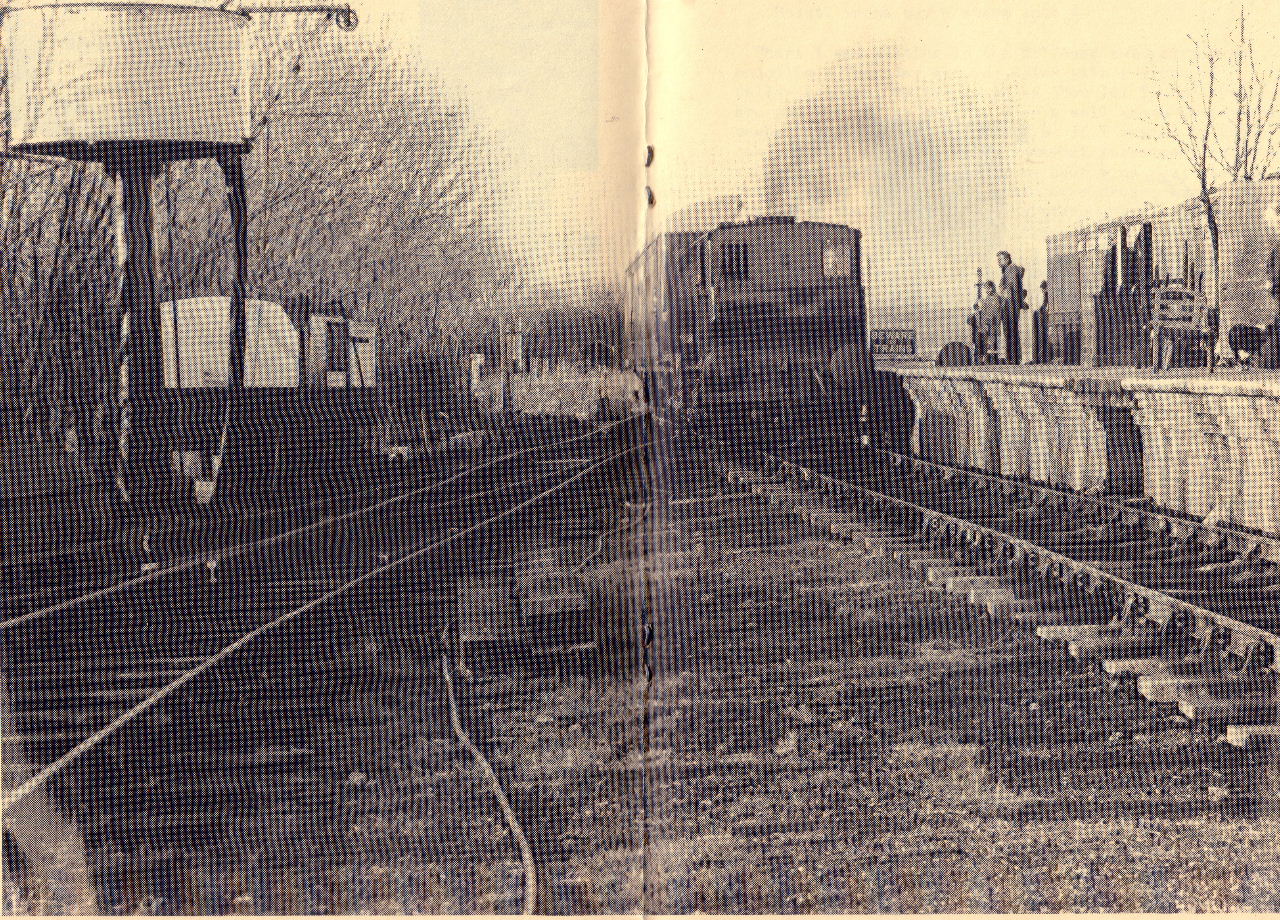 Work has continued on tidying up the station area by clearing away the assorted rubbish which continually seems to appear from nowhere.  Grass is now being encouraged to grow in the area in the middle of the run round loop to form a rough lawn and kept trimmed with a strimmer.  The stationary engine displaced by the new buffet is likely to be permanently mounted in the middle of the loop, and possibly made operational by a buried pipe to a compressed air or steam supply from one of the locos.

Sewer pipes have been run from the portacabins and portaloo out into the culvert in the park.  Most of the trench digging was done by a rented (cheaply!) JCB but a lot of work had to be finished off by hand.  This involved around a dozen or so people and is another example of what can be achieved by our steadily expanding volunteer workforce.

Following a problem with the release of the portacabin mentioned above from its current owners, a further two smaller portacabins have been acquired and arrived on site on December 1st.  Due to various problems, these units took two days to unload from the lorry and a further three Sundays to winch them through the fence and into position.  There are plans afoot to make one of the cabins into a mess room for members, and the other into a washroom with showers, lockers, etc.

The Railway Heritage Committee has the function of designating records and artefacts (or classes of record and artefact) which are historically significant and should be permanently preserved.

This enamelled sign came from Stafford No.5 signal box, and was given to the Museum by Network Rail – our thanks to the Company.

The sign can be seen set into the signal box.  On one end is a white patch with a red arrow, and on the other, a clear white patch to balance up the sign.

It may be of interest to Chasewater Railway members that the Station Hotel, Stafford, where the inaugural meeting of the Railway Preservation Society, fore-runner of Chasewater Railway, was held in 1959, was approximately 150 yards from the signal box! 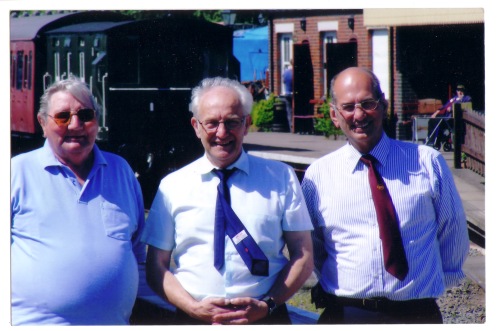 Dave Doman brought his father’s ashes to Chasewater Railway for one last journey on a steam locomotive.  He travelled on the footplate of the Barclay Loco ‘Coln McAndrew’ driven by Keith Sargeant.

The photos at the end of the video show the train ready to leave Brownhills West, Mick’s return from his trip and passed back to son Dave, and one final visit to the footplate of Hawthorn Leslie engine, ‘Asbestos’. 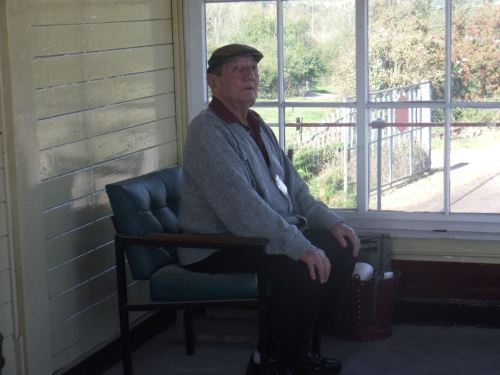 In the Madeley Signal Box, September 2014

A great bloke – a great friend

The Latest Museum Arrivals – Including a Local Colliery Wagon Plate

The Latest Museum Arrivals – Including a Local Colliery Wagon Plate 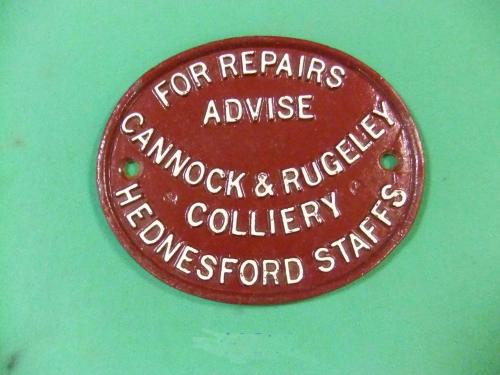 This Cannock & Rugeley Colliery wagion plate is not the most common item ever seen in the museum – in fact, no-one we have asked has ever seen one!  This obviously makes it a bit special.  Unfortunately, it has a crack (repaired) through the right-hand bolt hole – I wonder how that happened?! 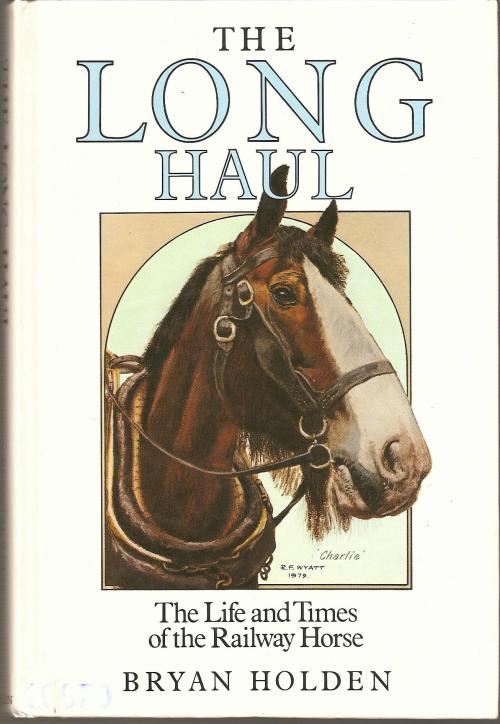 This next item, a book for the library, has come along at a good time – as we have recently seen the return of the horse-drawn parcels van.

It should be pointed out that the horses in this book used to pull carts, vans, etc. unlike the Chasewater Railway Museum version, which seems to prefer to ride in them! 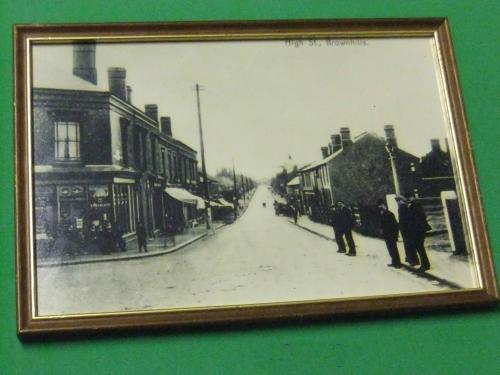 The final item was a raffle prize at the recent Gerald Reece talk about Brownhills, and shows Brownhills High Street in the early 1900s, won by one of the museum staff.  If you’ve seen the photo on Brownhills Bob’s site, the bald headed bloke on the back row, right-hand side! 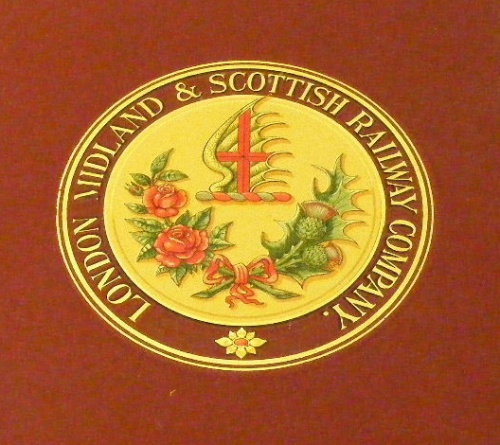 Formed by the amalgamation, with effect from 1 January 1923, of the Furness Railway, Glasgow & South Western Railway, Highland Railway, London & North Western Railway, Midland Railway and North London Railway. Many smaller companies were absorbed at the same time including several in Ireland, previously owned by the Midland Railway. The Caledonian Railway and the North Staffordshire Railway, because of certain legal requirements not completed by the due date, entered the fold from 1 July 1923. This gave the LMS lines stretching from Thurso to Bournemouth (via the Somerset & Dorset Railway) and from Holyhead to Lowestoft (via the Midland & Great Northern Joint Railway), and access to Southend (LT&SR) and South Wales (via the ex-Neath & Brecon Railway).

Under the Transport Act 1947, along with the other members of the “Big Four” British railway companies (GWR, LNER and SR), the LMS was nationalised on 1 January 1948, becoming part of the state-owned British Railways.

The LMS was the largest of the Big Four railway companies serving routes in England, Northern Ireland, Scotland and Wales. 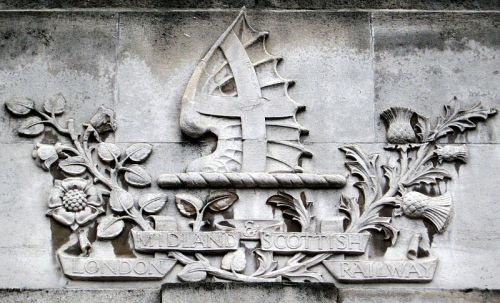 Source:  Transfered from en.wikipedia Transfer was stated to be made by User:oxyman. Author  Original uploader was Redvers at en.wikipedia
(Original text : Redvers)  Licensing:  This file is licensed under the Creative Commons Attribution 3.0 Unported license. 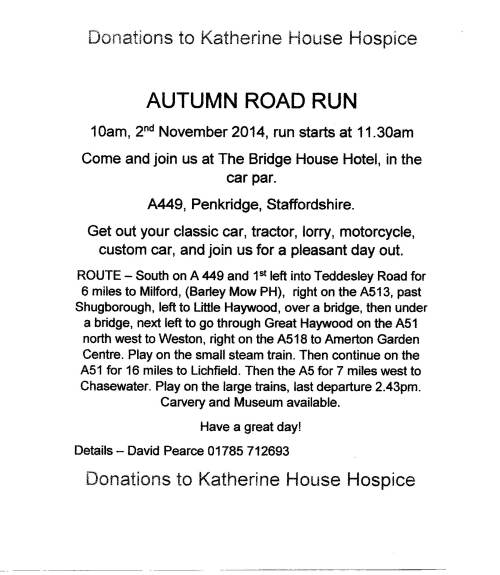 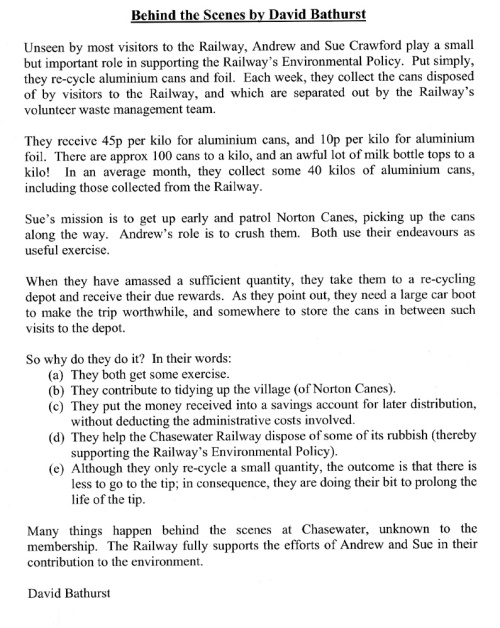 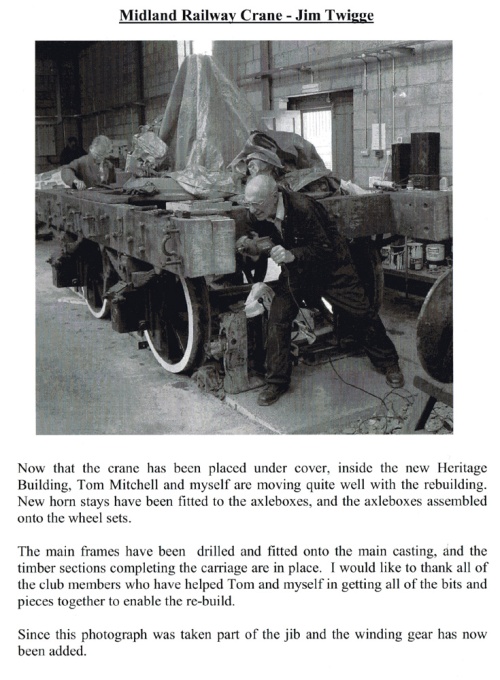 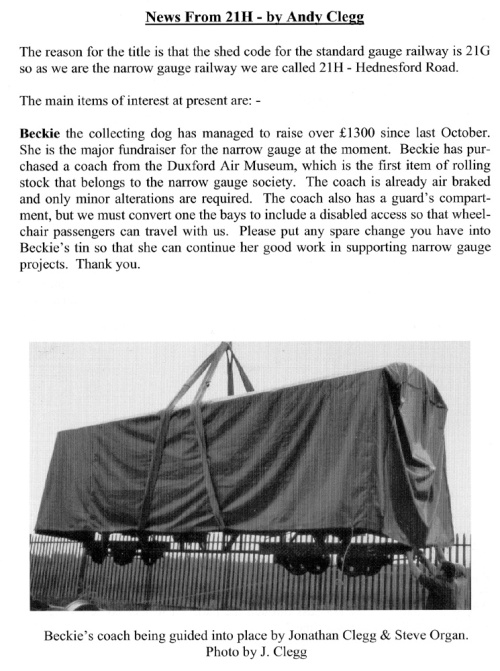 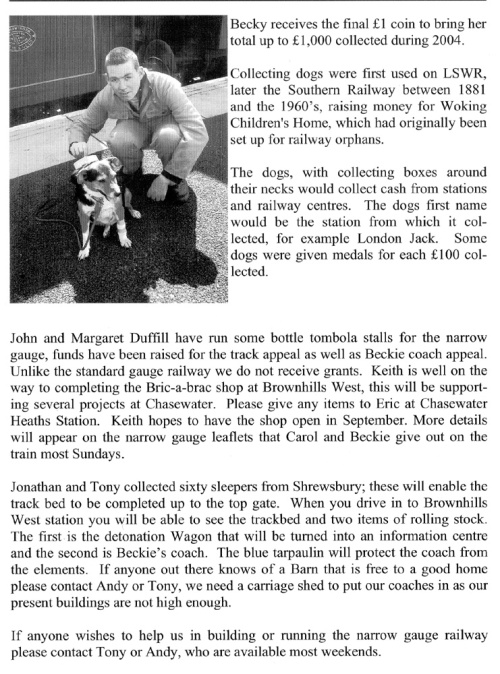 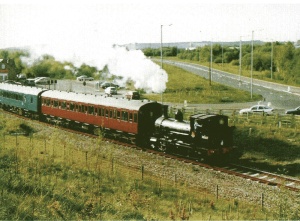 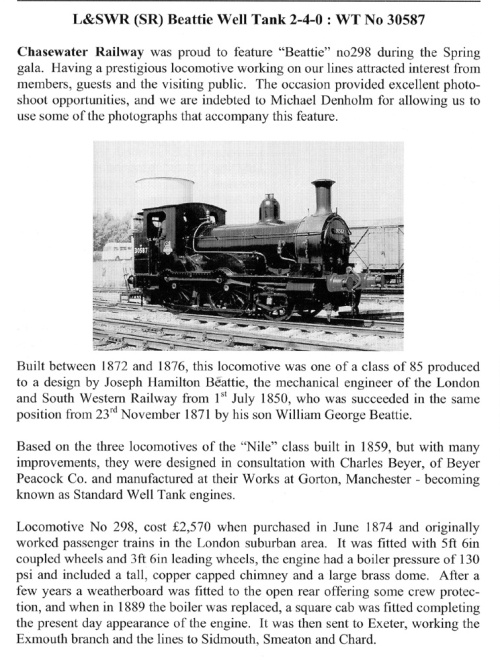 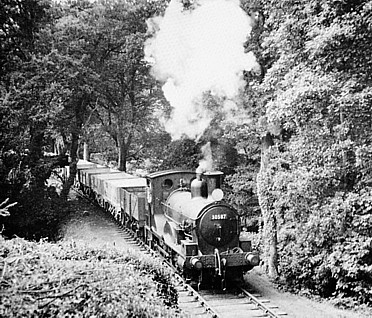 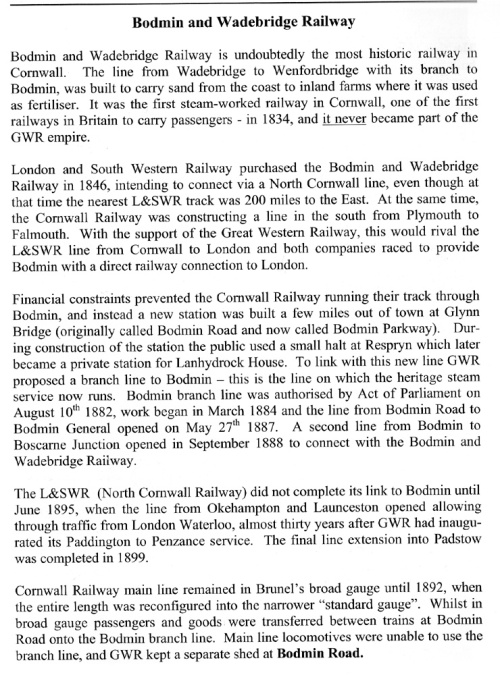 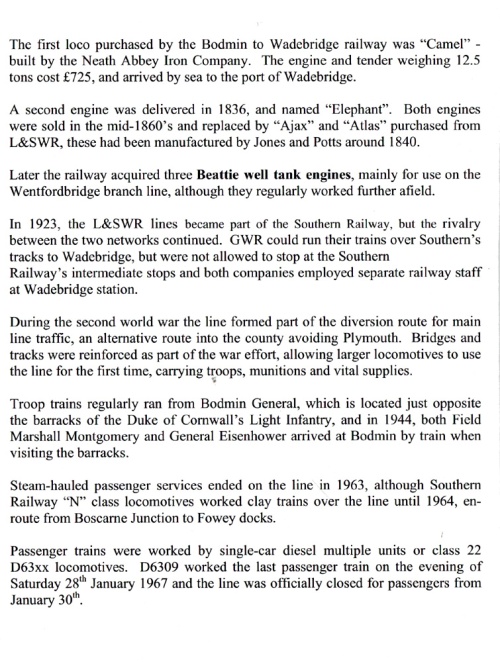 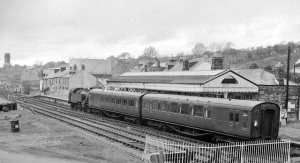 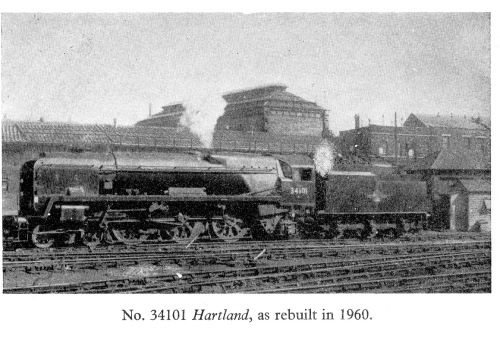