A bit from the scrapbook

One of our visitors this weekend – 27/27 June – brought a couple of newspaper cuttings that he thought might be of some interest to the museum – they will certainly be added to a scrapbook.  Included with the cuttings was a 1994 Chasewater Railway leaflet.

The main cutting was about miniature steam locomotives, although not strictly models, are interesting considering the Chasewater Railway Model Show will be held in a couple of weeks – 11th July.

Gauging the way to a steaming success.

Steve Whapples and barrie Griffin get steam up outside the sheds.

The largest gathering of miniature steam locomotives to be held in Britain took place at Walsall Arboretum.

More than 30 tiny locomotives from all over the country converged on the Arboretum to take part in the annual meeting of the 7¼-inch gauge Steam Society.

Nearly 200 steam enthusiasts went along to the Society’s meeting at the Crest Motel, Walsall, before taking part in a festival of steam on Britain’s longest double gauge track in the Arboretum.

Mark and Tony Cheadle of Walsall, as signalman and guard, clear the line for Tinkerbell.

‘The highlight of the weekend was having 20 trains in steam on the track at one time,’ said Mr. Colin Cartwright, who runs the Arboretum line.  ‘We had about 2,500 people on the trains at the weekend.  It was a superb event.’ 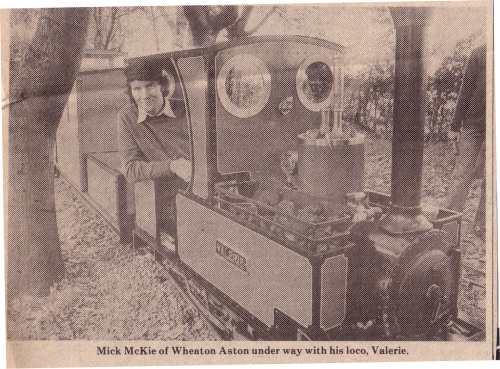 The festival also attracted two top names in the world of miniature gauge locomotives – Lord John Gretton, who runs the 10¼ – inch line at Stapleford Park, near Melton Mowbray and Joseph Ballantyne-Dykes, who operates the privately-owned Spinney railway in Surrey.

‘They were very impressed with the meeting,’ said Mr. Cartwright.  ‘It was fantastic to see so many people enjoying the meeting.’

Dave Pucei of Norton Canes  at work on his GWR tanker. 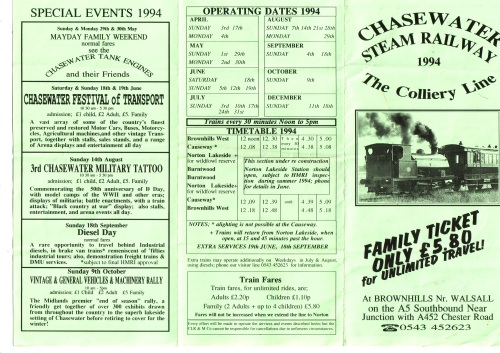