The Chard Branch Lines were two railway lines in Somerset, England, that met end on in Chard. The first was opened in 1863 by the London and South Western Railway as a short branch line from their main line. This approached the town from the south. The second and longer line was opened by the Bristol and Exeter Railway in 1866 and ran northwards from Chard to join their main line near Taunton.

From 1917 they were both operated by one company, but services were mostly advertised as though it was still two separate lines. It was closed to passengers in 1962 and freight traffic was withdrawn a few years later.

Chard Central.  9718, with two derelict looking coaches, leaves the weed-choked platform with the 4.07pm for Chard Junction in 1961.  M.J.Fox

The London and South Western Railway (LSWR) opened its first station serving Chard at ‘Chard Road’ in 1860 on its new Yeovil and Exeter Railway. The Chard Railway Company was established in 1859 and work started on the branch line from Chard Road to the town on 1 November 1860. The following March the LSWR agreed to purchase the company, a deal that was completed in 1864. The line was opened to the terminus at Chard Town on 8 May 1863 (the original station was renamed ‘Chard Junction’ in 1872).

Chard had been connected to Taunton in 1842 by the Chard Canal but early proposals to convert the canal into a railway line failed to materialise. Instead the Bristol and Exeter Railway (B&ER) opened a line parallel to the canal on 11 September 1866 using powers initially granted to a Chard and Taunton Railway Company by an Act of Parliament in 1861. In the following year the B&ER purchased the little-used canal for £6,000 and closed it. The B&ER line was single track and connected a new ‘Chard station’, to the B&ER’s main line at Creech St Michael. Intermediate stations were situated at Hatch and Ilminster, but another was opened at Thorn in 1871.

The LSWR was built to 4 ft 8 1⁄2 in (1,435 mm) standard gauge but the B&ER was a 7 ft 0 1⁄4 in (2,140 mm) broad gauge line until 19 July 1891 when it was converted to standard gauge. Other branch lines around Taunton had been converted between 1879 and 1882 but the Great Western Railway (GWR, which had amalgamated with the B&ER in 1876) left the Chard branch as a broad gauge line to prevent the LSWR requesting access to Taunton. The LSWR extended its line to the B&ER station two months after it had opened and it was then operated as a joint station. During World War I the GWR undertook to work the line from Chard Joint station to Chard Junction station from 1 January 1917, although separate signal boxes were maintained until 1928.

In 1923 the LSWR was itself merged into the new Southern Railway (SR). Two additional stations were opened in 1928 on the GWR section. Both railways were nationalised in 1948 but were initially managed as two separate regions – the GWR becoming the Western Region and the SR became the Southern Region. A fuel shortage in 1951 led to the line being temporarily closed from 3 February to 7 May. Eleven years later passenger services were withdrawn permanently on 10 September 1962 and the line closed completely between Creech and Chard on 6 July 1964. Public goods traffic was retained at Chard until 1966.

3787 climbs throatily out of Ilminster with a train bound for Chard in March 1962.  M.J.Fox

The Origin of the Line

The official confirmation to engage engineers to plan and build the line came in 1857 when the advantages of rail communication with the busy harbour at Watchet and the County Town at Taunton became apparent.

There was some initial difficulty in raising the capital, which delayed the start until 1859, and the commissioning until 1862.

The following extract from ‘The History of the Great Western Railway’ by E.T.MacDermot, M.A. gives a brief description of the origin of the line:

‘The West Somerset Company, promoted chiefly by the local landowners with Sir Peregine Acland for Chairman, was incorporated in 1857 to make a railway from the Bristol and Exeter near Taunton to the harbour of Watchet.  Brunel was retained as engineer, though he himself probably had very little to do with the undertaking, which must have been about the last to be brought out under his auspices.  He was soon succeeded by his chief assistant, R.P.Brereton.  The Directors had much trouble in raising the capital of £160,000, but at last work was begun at Woolston Moor on the 10th April, 1859.  Owing to mainly financial difficulties, it proceeded very slowly and nearly three years elapsed before these 14½ miles of broad gauge single line were finished.  They were opened by the Bristol & Exeter Company, to whom the line was leased in perpetuity on the 31st March, 1862, for passenger traffic only, the goods shed not being ready till August.  The stations between Taunton and Watchet were Bishops Lydeard, Crowcombe Heathfield, Stogumber and Williton, there being none as yet at the junction two miles west of Taunton.’ 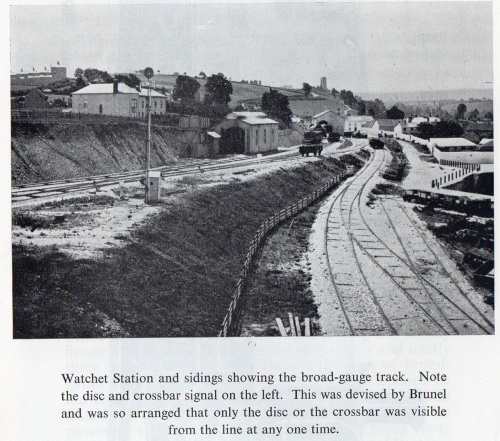 As the traffic on the line grew during the early years it became obvious to the Directors of the West Somerset Company that an extension of the line as far as Minehead would increase the business from areas as far afield as Porlock and Lynton.

It was decided that a local company should be set up to deal with the affairs of the new line, and although the work was due to start in1865, financial difficulties delayed the opening for a further nine years.

The ‘History of the Great Western Railway’ by E.T.MacDermot, M.A. recalls:

‘An extension of the West Somerset Railway from Watchet to Minehead was first authorised in 1865 to be made by a local company, entitled the Minehead Railway Company, which, however, failed to proceed with its undertaking and was dissolved in 1870.  It was reconstituted under the same name by an Act of the following year with better results, and succeeded in opening its 8¼ miles of broad-gauge single line on the 16th July, 1874, to be worked by the Bristol and Exeter Company at a rent of half the net receipts with a guaranteed minimum of £2,000 a year.’

The Minehead Company was absorbed in 1897, by which time all its capital had been acquired on behalf of the Great Western.

The Act of Parliament referred to by Mr. MacDermot was mentioned in the Free Press together with details of the activities  and celebrations which took place.

In 1882 the Directors of the West Somerset Railway authorised the reduction of gauge from the 7ft wide gauge track to the 4ft 8½ins. narrow gauge.

Due to the necessity of completing the work as rapidly as possible, a large number of railway workmen were engaged in the project.

On 5 February 1971, a Minehead Railway Preservation Society organised a meeting in Taunton and a working party headed by Douglas Fear, a local business man, was tasked with investigating how the line could be reopened as a privately-owned railway. In May, a new West Somerset Railway Company was formed to acquire the line and operate a year-round commuter service from Minehead to Taunton alongside which a limited summer steam service could also run. A deal was agreed with British Rail to purchase the line with the support of Somerset County Council, however the council was wary of the lucrative Minehead station site falling into private hands should the railway fail. Instead, it purchased the line itself in 1973 and leased back the operational land to the West Somerset Railway Company.

The proposed commuter service never materialised but the line was slowly reopened as a heritage railway. Minehead to Blue Anchor was the first section to see trains restored, opening on 28 March 1976 and services were extended to Williton on 28 August the same year. Trains returned to Stogumber on 7 May 1978 and they reached Bishops Lydeard on 9 June 1979. A new station at Doniford Halt was opened on the coast east of Watchet on 27 June 1987 to serve a holiday camp at Helwell Bay.

In 2004, work started on constructing a new triangle at Norton Fitzwarren which included a part of the old Devon and Somerset line  and a ballast reclamation depot opened there in 2006.  In 2008, a new turntable was brought into use at Minehead.  A new station opened on 1 August 2009 at Norton Fitzwarren on a new site a short distance north of the main line. 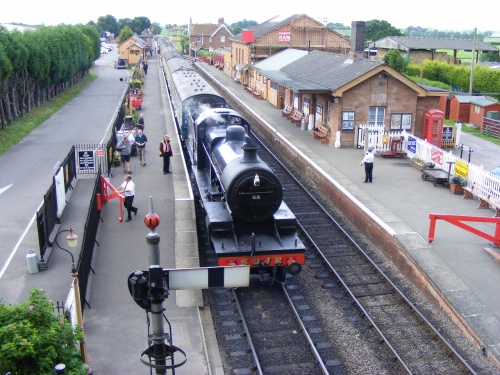 For more information go to – www.west-somerset-railway.co.uk