A lot of progress has been made over the winter months at Chasewater to the extent that it is now very difficult to keep the news sections of the magazine updated before it is printed.  This is because there now seem to be a lot more people than ever before working regularly on our railway, and the effect of this is beginning to show.  The track extension is proceeding at a very impressive pace, and we are on the verge of having three steam locos available for running trains, and a choice of passenger and goods rolling stock in gradually improving condition.

Anyone wishing to help in any department on the railway will be most welcome at Chasewater this summer – if in doubt, please ask for details at the booking office.

No.4 Asbestos – This loco finally passed its hydraulic test in March, and is now being re-assembled ready for steam testing.  A repaint is also being carried out so that the loco will re-enter service in green livery later in the year.

No.5 Sentinel – This loco has passed its annual visual boiler examination and was back in service on 11th April to work a special train for the Industrial Railway Society.  Trouble was again experienced with rust from the inside of the superheater coil being drawn up through the regulator box and blocking the steam supply to the Weir pump, steam brake and blower.  It is hoped that this will not become a regular occurrence otherwise our train service may suffer badly.

No.2 Lion – Progress on this loco has continued slowly, but following the recent delivery of the last of the long awaited new washout plugs the hydraulic test can now be carried out.  All of the copper pipe needed to replace that stolen a number of years ago has now been acquired and will shortly be bent and fitted.

S100 – The first of six pairs of axlebox hornguides have now been re-ground to a highly accurate mirror-like finish.  Work on the other five pairs is continuing.

Fowler – This loco has remained in service as our only working diesel, carrying out all shunting and works train duties.

DL7 – This loco has remained out of service with its engine partially stripped awaiting refurbishment of the cylinder heads.

No.21 Diesel – This loco has now been moved into the shed where work has continued on its restoration.  One major problem appears to be the radiator matrix which has rotted through and will require replacement.

Smith Rodley Crane – This was recently used to remove the saddle tank from Asbestos but has otherwise remained idle.

When the former LBSCR loco was sold to three members of the East Somerset Railway and left Chasewater in 1978 for pastures new at Cranmore, it was agreed that we should receive regular updates on its restoration.

Following extensive (and expensive) repairs to just about every component part, the loco first steamed at Cranmore in July 1990.  This was a steam test minus tanks and a resultant fusible plug leak saw the fire dropped in order to affect repairs and try again another day.  Subsequent steam tests have found out other irritating problems – leaking pipework, regulator blowing past and so on.

The latest position gleaned from a phone conversation with the East Somerset Railway’s Barry Buckfield on 31st December, 1991 is that both tanks have been fitted, as has lagging and cladding, however a troublesome fusible plug has to be replaced, and valve setting is still to be carried out.  Sometime during 1992 the E1 will move under its own power for the first time in twenty nine years.

At one time it had been intended to restore the loco as British Railways 32110 in black livery which, of course, it never carried as it was sold by the Southern Railway to the Cannock and Rugeley Colliery Company in 1926.  The loco, it has now been decided, will be restored to traffic in Stroudley’s improved  engine green, although it will not carry the name ‘Burgundy’ associated with it during most of its LBSCR days. 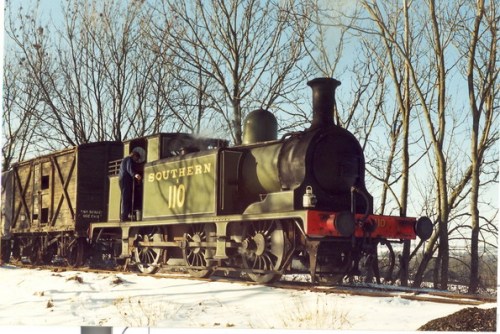 Once remaining work has been completed and running-in trials have taken place, the hundred and fifteen year-old will join that rare group of working centenarians in railway preservation.

While much of our collection at Chasewater is unique, some locomotives and carriages are similar to others preserved elsewhere.  Readers may be interested to know what is happening to these vehicles, and so here is a brief résumé –

S100’s sister is at the Yorkshire Dales (sorry, Embsay Steam) Railway, and has sat derelict for many years, but during 1991 work started.  The loco, ‘140’, has been stripped down to its individual components, and with a large work force and plenty of money, progress is quite rapid.  New tanks, bunker and cab have now been built and the horn guides are being ground to something like the proper shape.  It is quite likely that ‘140’ will run again in 1994. 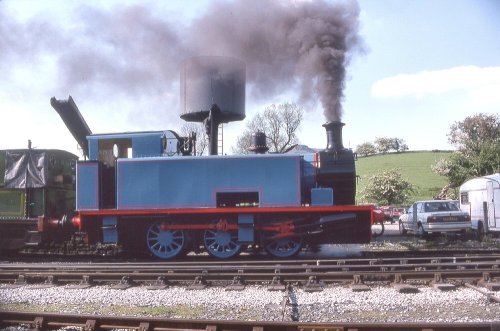 Also at the YDR is ‘Annie’, a Peckett identical to our No.917.  This loco was in a very similar condition to ours, with a rotten tank and problems with the smokebox tubeplate.  Once again, this engine is likely to run in the next two years but it is difficult to see what use such a small engine would be at Embsay.  Perhaps we could borrow it!

Our long-suffering Gloucester DMU trailer is rapidly becoming an endangered species, as the West Somerset Railway have given up with its sister and sent it for scrap.  When DMUs were first preserved in the late sixties many enthusiasts complained, arguing that such vehicles were too commonplace to warrant preservation.  Now enthusiasts are complaining that the lines are disposing of these coaches.  (Being cynical, I expect they are the self-same people!)  It certainly proves that, as the old saying goes, nostalgia ain’t what it used to be!