Railways first came into being not to carry passengers, but to convey freight, especially mineral traffic like coal.  In the early days, when few lines were interconnected, the variety of goods wagon did not matter, but as railways expanded and through trains became common, it was essential to have wagons whose buffers, brakes, couplings and so on all matched up.

The Railway Clearing House (RCH) the body which liaised between the railways, looked into the problem early on and issued standards to all railway companies, wagon builders and private wagon owners. 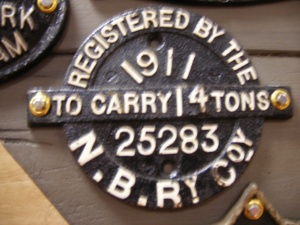 The wagon carrying this plate was registered by the North British Railway Company and allowed to run on main lines.

The main line railways adopted these standards fairly quickly, but the private owners, especially collieries and coal merchants, were reluctant to comply, and damage and derilaments became common due to their wagons either lacking proper buffers and brakes or being poorly maintained.

In the 1880s, however, it became a legal requirement for all privately owned wagons to be registered by the railway company to whose sidings their owners were connected, and only those that reached the Clearing House standard were allowed to run on main lines.

Each wagon so passed had two plates, one on either side of the main frame, advising its date of manufacture, its registration number and its carrying capacity.   In 1907, the RCH designed a new star-shaped plate for tank wagons.

Many of the ordinary registration plates come with their lugs broken off, but these can easily be repaired usingfibreglass filler.  The normal colour seems to have been black with white lettering, and red with white letters for tank wagons.

However, some privately owned wagons were painted in quite garish colours, and it seems likely that their plates were similarly treated.  Nearly all plates were made of cast-iron, but examples in brass or lead alloy are occasionally seen.