‘Route of the Florida Sunbeam’ 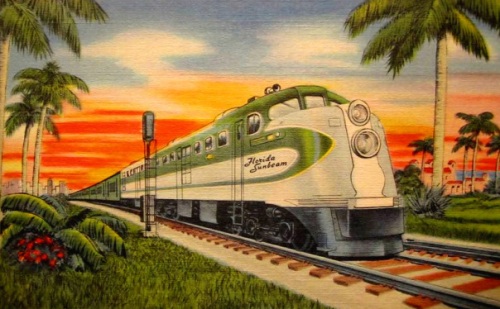 THE FLORIDA SUNBEAM was operated by the New York Central System, the Southern Railway System, and the Seaboard Airline Railroad. On Jan. 1, 1936 the Florida Sunbeam was inaugurated as a winter-only train between Cincinnati and both coasts of Florida with through cars from Great Lakes cities. In 1949 it was replaced with the much faster, streamlined NEW ROYAL PALM on a changed routing. This linen postcard depicts an ALCO DL-109 diesel locomotive pulling the train. It was advertised as being diesel powered between Cincinnati, Ohio and Valdosta, Georgia. 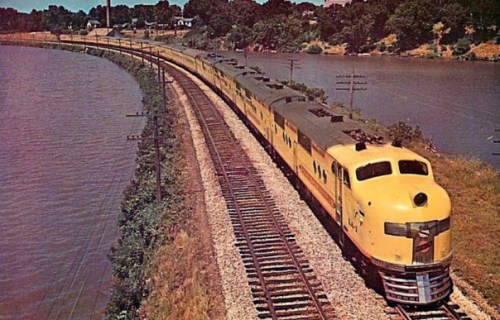 Postcard photo of the streamliner City of Los Angeles near Sterling, Illinois and traveling along the Rock River. The train is pulled by a EMC E2 locomotive. The City of Los Angeles was a streamlined passenger train between Chicago, Illinois, and Los Angeles, California via Omaha, Nebraska, and Ogden, Utah. Between Omaha and Los Angeles it ran on the Union Pacific Railroad; east of Omaha it ran on the Chicago and North Western Railway until October 1955 and on the Milwaukee Road thereafter. This train was the top-of-the-line for the Union Pacific, which marketed it as a competitor to the Super Chief, a streamlined passenger train on the Atchison, Topeka and Santa Fe Railway, and the Golden State, a streamlined passenger train jointly operated by the Rock Island and Southern Pacific railroads. As with the City of Los Angeles, many of the train’s cars bore the names of locales in and around its namesake city. Circa late 1940s.