Map of LSWR railway branches to Exmouth and Sidmouth, Devon, UK in 1908

Licensing – I, the copyright holder of this work, hereby publish it under the following license:  This file is licensed under the Creative Commons Attribution-Share Alike 3.0 Unported license.

Sidmouth Railway: this article describes a temporary railway to build a pier at Sidmouth Harbour, and the later railway branch lines that connected Sidmouth and Exmouth to the main line network at Sidmouth Junction.

Sidmouth had been a fashionable resort and a small port. It was proposed to build a harbour protected by stone piers, and a temporary railway was built to bring stone from a nearby coastal rocky area.

The Sidmouth Railway was a railway branch line that ran from a junction at Feniton to Sidmouth, connecting the resort to the main line network.

All these railway lines are now closed. 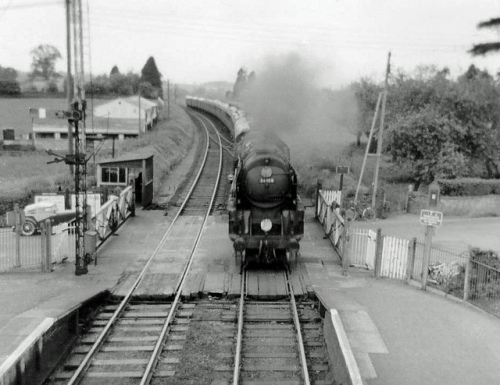 A first railway for the construction of piers

In the early years of the nineteenth century Sidmouth had been a popular watering place, but its popularity was declining; at the same time the small, exposed harbour was shoaling badly, and local promoters considered building a properly protected harbour, by the construction of two stone piers at the Chit Rocks, at the western end of Sidmouth sea front. Plentiful supplies of suitable stone were available at Hook Ebb, a location on the coast 1¾ miles to the east.

An Act of Parliament for the work was obtained in 1836, and the railway was duly laid. Foundation stones for each of the two piers were formally laid amid considerable ceremony, befitting the intended dedication of the piers to, respectively, Her Imperial Highness The Grand Duchess Helena of Russia, and Princess Victoria (later to become Queen Victoria).

The railway ran parallel to the sea front, and along the esplanade at Sidmouth itself, but there was a tunnel about a third of a mile long through Salcombe Hill. The line ended on the shingle beach, crossing the River Sid on a small viaduct. The railway seems to have been of 3ft 6in gauge, with track consisting of longitudinal wooden beams 6½ by 4 inches with a ⅜ inch plate on the top. In the shingle the railway was fixed in place by vertical timber piles.

A local blacksmith constructed a machine to pull the wagons loaded with the stone; the machine relied on human muscle power and was found to be inadequate. Apparently a locomotive was now ordered, and brought by coastal ship to the shore at Sidmouth; however there was no craneage available to unload it, so the ship was taken to Exmouth, where the locomotive was unloaded and brought to Sidmouth by horse and cart.

On placing the locomotive on the track at Sidmouth, it was discovered that it was too large to pass through the tunnel, and the scheme to use it was abandoned. Afterwards, it seems to have been used to give novelty pleasure rides for a period.

By 1838 the locomotive was removed, as was also the viaduct at Sidmouth. By this time £12,000 of the £15,000 projected cost of building the harbour had been expended, and nothing further was done, the subscribers having nothing to show for their investment. The tunnel remains in place, and during 1966-1967 storm action exposed a considerable length of the piles of the railway.

A connection to the main line

In 1860 the London and South Western Railway (L&SWR) opened a main line from Yeovil to Exeter on 18 July 1860, giving a through route from London. The rugged terrain of the south-east Devon coastline meant that the railway passed some distance to the north of Sidmouth; the nearest station was Feniton, nine miles away. There had been a number of railway schemes put forward over the previous decade or so to serve Sidmouth directly but they had come to nothing.

On 18 December 1861, London promoters held a meeting for the purpose of forming a Company to build a railway branch line to Sidmouth and a harbour there. The “Sidmouth Railway and Harbour Company” obtained an Act of Parliament on 7 August 1862 with a share capital of £120,000 and authorised loan capital of £40,000. Subscriptions were slow to be taken up, and the contractor Shrimpton complained that he was unable to make progress, as the engineer, H H Bird, had not supplied adequate plans. Further difficulties arose when it emerged that the Company had secretly divided the share issue into two classes, and calls were only being made to one of the classes. Finally it was shown that the Company had unsupported liabilities of £20,000, over three-quarters of which were due to the contractor Shrimpton.

Undertakings were given to resolve the matter, but the Company foundered in 1869.

The trustees of the Balfour family now launched a scheme for a Sidmouth Railway, and this got its Act of Parliament on 29 June 1871, with share capital of £66,000 and borrowing powers of £22,000. The line was to be constructed under the arrangements for a Light Railway, and an agreement was made with the L&SWR for 50% of receipts if over £4,000, with an option for the L&SWR to purchase the railway.

The share issue was successful and a tender for construction of the line was awarded to R T Relf of Okehampton for £35,000. Possibly learning from the delays encountered in constructing the neighbouring Seaton Branch Line, there was a penalty clause for late completion of the work. Nonetheless Relf got into difficulties, asking the company for extra payment as he found that he had under-priced the station work, designs for which had not been completed at the time of tendering. The directors made a small allowance to him, and he sued for the balance, but he lost his case. However the railway was complete by July 1874. Col F H Rich of the Railway Inspectorate of the Board of Trade duly made the inspection and passed the line for opening. It opened on Monday 6 July 1874.

The Sidmouth Railway in operation

On the opening day there was no formal ceremony to mark the event, although celebrations took place through the first week.

The branch was single track. The junction station on the main line at Feniton had been called Ottery Road immediately prior to the opening, but the name was changed to Sidmouth Junction on the day of opening of the branch line. Sidmouth trains used a bay platform on the down (south) side of the station, and they left the bay in an eastwards direction. On leaving the station, the line curved round to the south falling at 1 in 110 and then 1 in 53, followed by flattish gradients to Ottery St Mary, 2 miles 78 chains from Sidmouth Junction; there was a crossing loop. Just before the next station the line crossed the river Otter on a 55 yard viaduct, then entering Tipton, at 5 miles 8 chains, also equipped with a crossing loop. The name was changed to Tipton St John on 1 February 1881.

View SE, towards Exmouth and Sidmouth: ex-LSW Sidmouth Junction – Sidmouth/Exmouth branch. No. 30583 was one of the LSW Adams ‘0415’ class 4-4-2Ts which survived much longer than most of the class as it was needed for working on the lightly-built Lyme Regis branch. It was built 3/1885 as No. 488, then as No. 0488 in the Duplicate list was withdrawn in 9/17 and sold to the Ministry of Munitions who employed it at the Ridham Salvage Depot, Sittingbourne. In 4/19 it was bought by the East Kent Light Railway and numbered 5. It worked on that line for 18 years, then lay derelict at Shepherdswell for two years. However, it was re-acquired by the SR eventually in 3/46, restored after the War and put to work on the Lyme Regis branch in 12/46, where it worked until 7/61. Its life was not however ended even then, for it was purchased by the Bluebell Railway – where it still remains. This 1953 occasion was a Rail Tour arranged by Ian Allan Ltd., with (intended) high-speed runs from Waterloo to Exeter (Central) and back, with an auxiliary tour to Exmouth and back via Sidmouth Junction.

Leaving Tipton the line now climbed at 1 in 45 for two miles to Bowd Summit, then falling at 1 in 54 for a mile to Sidmouth station, at 8 miles 23 chains. The station was some considerable distance from the sea front.

When the line opened, the passenger train service was seven trains each way six days a week, taking 28 to 30 minutes for the journey. After the opening of the Budleigh Salterton line (see below) the train frequency on the northern half of the original Sidmouth railway naturally increased. By 1909 the service had approximately doubled, with trains on Sundays also. Sidmouth was not an industrial town, so goods services mainly brought inwards agricultural supplies, building materials and coal for domestic purposes and for the gasworks at Sidmouth.

The branch was worked by staff and ticket at first, with Tyers electric train tablet system being introduced in 1904. The very steep gradients meant that special precautions had to be imposed for the operation of goods trains over the line.

Locomotive power initially was restricted to those suitable for use on light railways, and this is thought to include Beattie 2-4-0 well tanks. In later years the M7 0-4-4T class came to dominate. When the West Country light pacific 21C110 was to receive its name Sidmouth at a naming ceremony, it visited Sidmouth for the purpose on 27 June 1946, but the class was normally banned until after 1951.

In 1894 the L&SWR, which was operating the line, offered to purchase it outright for £70,050 but this was refused by the Company. However in 1922, just before the Grouping of the railways in Great Britain, a share swap was arranged, effectively ending the independent existence of the Sidmouth Railway company.

© Copyright Lewis Clarke and licensed for reuse under this Creative Commons Licence.

The elephant house at the top end of the zoo, is home to the elephants and giraffes. Nearby are the camels, peccaries, red river hogs, and the Barbary sheep.  © Copyright Lewis Clarke and licensed for reuse under this Creative Commons Licence.

With more animals than anyone else in the South West you’re in for a really wild time. See them all – giraffes, lions, gorillas, cheetahs and thrilling crocodiles, plus our cheeky meerkats, colourful snakes and amazing monkeys. There are also indoor play areas, the Jungle Express train and uniquely, six habitats that mimic the animals’ natural environment. Come in and get close to over two thousand creatures. But you’d better leave a whole day – you’ll need it.

Come in and explore the big wild world !!

The Sumatran tiger is a carnivore clinging to life. It is being hunted towards extinction by the demands of Oriental medicine. It’s protected under law but the black market in tiger parts thrives. A few hundred Sumatran tigers remain in the wild in Indonesia – about the same number are safe in zoos around the world.  © Copyright Lewis Clarke and licensed for reuse under this Creative Commons Licence.

If you’re going to the south coast, you could always try a miniature railway of my childhood (it has been going that long!!):

Jump aboard the Jungle Express miniature railway and take a journey around our stunning lake to see areas not seen on foot!

Get exclusive peeps into the tiger and lion enclosures and ride past our gorilla island; see the gibbons swinging in the trees, the flamingos bathing in the pond and the beautiful birds of Brook Side Aviary.

The railway has been at the Zoo since 1940 when Reginald Goddard from Chessington Zoo joined us for a brief period during the war.

Trains run daily from Easter to October and there is a small charge.

© Copyright Lewis Clarke and licensed for reuse under this Creative Commons Licence.