Could you help create a secret garden in Smethwick? 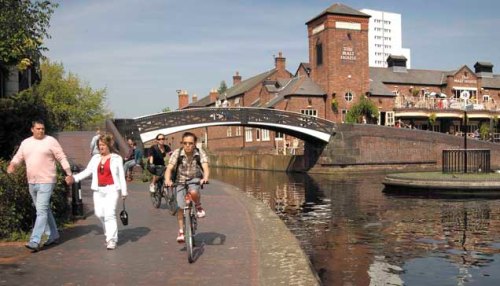 We’re calling for an army of local volunteers in Smethwick in the West Midlands to lend a hand and help us transform a once thriving nature trail along the Birmingham Main Line Canal back to its former glory.

The Galton Valley Nature Trail was once farmland and a haven for plants and insects. The area is now looking unloved and unwelcoming so local people living in Smethwick are being asked to help the charity, Canal & River Trust, to recreate this canal side community garden.
The volunteers will be helping to clear pathways and cut back vegetation, plant a whole host of wildlife loving plants as well as putting up bird and bat boxes in the trees and installing reed beds to help improve water quality. There are also plans to create a community orchard which, once established, could provide fresh fruit to the local community via the local food bank network.
Beauty spot
Peter Mathews CMG, chair of the west midlands waterways partnership for the Canal & River Trust, said: “The Galton Valley Nature Trail used to be beautiful and often you would spot bluebells and early summer raspberries poking through the trees and bushes. This part of the canal could once again be a really lovely beauty spot but we need help from local people to help us to revitalise this nature trail and attract more animals and insects back to this secret garden.
“We do have quite a bit of work to do and, where we have already made some small improvements, we have already noticed an increase in the amount of wildlife fluttering along the canal which was brilliant to see but more work needs to be done and we need everyone to muck in and help lend a hand.”
The next meeting is on Saturday 3 May from 10am – 3pm at the Smethwick Pumping House, B66 1BA.

A stretch of the Monmouthshire & Brecon Canal will reopen to boats on 25 April, following around £1million of repairs to stabilise an embankment which had ‘slipped’ after it had become so saturated with rain over the wet winter period that it slumped down the hillside.

We’re installing almost 500 massive pins, each 10-15 metres long, along the canalside at Llanfoist in the Brecon Beacons. While the remainder of the canal has stayed open since work began in February, the full length of the waterway will now be navigable by boat for the first time this year, bringing a welcome boost to businesses in the area.
The final pins will be put in over the coming weeks, together with a mesh to secure them in place. New vegetation will be planted along the embankment to take the place of trees that had to be cut down to allow engineers to carry out the work. It is hoped that the towpath next to the affected stretch will reopen at the end of May; meanwhile walkers, cyclists and other towpath visitors can continue to use the canal thanks to a short diversion around the closed section.
Busy spring and summer
Vince Moran, operations director at Glandŵr Cymru, said: “We’re delighted to get the full length of the canal reopened in time for the busiest period of year. The Mon & Brec contributes millions to the local economy, so we hope this comes as good news for all those businesses who build their trade around a busy spring and summer.
“We saw unprecedented rainfall over the winter and it has required a major engineering project to repair the canal, with 500 pins effectively nailing the embankment back against the bedrock. We are pleased with how the work has gone and delighted that so many people have continued to visit the canal over the past two months. Now the navigation is open for business again we hope that even more people come and see one of the jewels of the canal system in the heart of the Brecon Beacons.”

Blast from the Past

For the winter edition of the Chasewater News I have included this article and map, gleaned by our Chairman David Bathurst, from the ’Railway Magazine’ of November/December 1944 as there is a reference to the closure of our line to passenger traffic in the 1930s and for the general interest in the way the area’s network of services has been steadily eroded over the years. 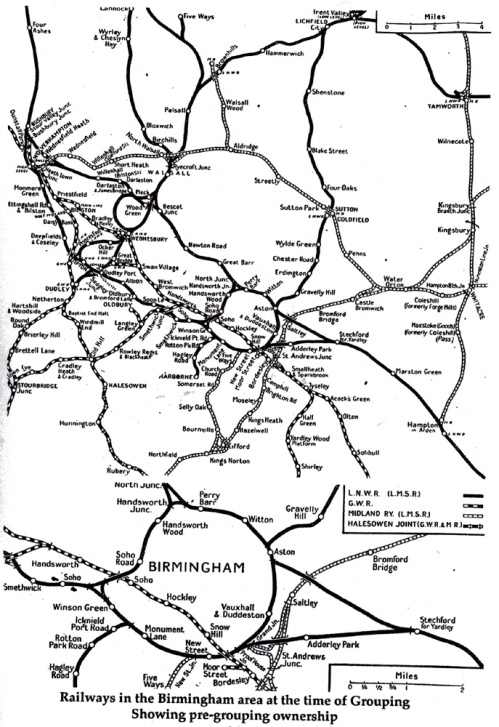 In looking through old timetables, one is often struck by the many old services which have been withdrawn and forgotten in the region of Birmingham and the Black Country.  By reason of lack of patronage, often because of road competition, these services became redundant and fell out of use, but some of them are of considerable interest.

Close up of image ‘lnwra1494’ showing the junction between the New Street and Stechford lines and the approach to Aston station. The buffer stop is the end of the blind siding that was designed to protect the main lines from runaway wagons on the Windsor Street down line – D.J.Norton

In the immediate vicinity of Birmingham the ‘Circle Service’ obviously comes first.  This was operated by the LNWR, leaving New Street Station from the east end, and running via Aston, the south side of the triangle at Perry Barr, and Monument Lane, thus arriving back at the opposite end of the station.  A similar service was worked in the other direction, and the journey time of about 30 to 40 minutes applied in each direction.  In May 1899, the service was seven west to east and five east to west trains on weekdays only, but in 1929 this was reduced to one train running Saturdays excepted, through from west to east, two in the reverse direction, and several trains from Birmingham to Vauxhall, via Perry Barr, also two trains from Stechford and Witton respectively, to Monument Lane, via Soho Road.  This service, which had become gradually more and more scanty, was finally discontinued on the outbreak of the Second World War.

Smethwick Junction  © Copyright Row17 and licensed for reuse under this Creative Commons Licence.

Secondly, comes the service provided by the LNWR from New Street to Smethwick Junction on the GWR Stourbridge line.  At one time, through portions were attached to trains from Euston, which were detached from the main train at Birmingham, and then forwarded to the GWR at Smethwick Junction, where they were coupled to GWR trains to Stourbridge and Kidderminster.  There was also a through coach to Wooferton on this route.  In 1899 the local service had six trains daily, on weekdays only, which left New Street at 8.48, 9.25, 11.30am, 12.30, 4.25, and 7.45pm and arriving back at 9.40, 11.30am, 12.46, 1.35, 5.10 and 9.05pm.  No indication is given in the tables, however, as to whether these were through portions or not.  The service had been reduced to three trains each way by 1913, and to two in July 1915; it was discontinued shortly afterwards.

Dudley Station, with the auto-train from Dudley Port  View NE, towards Wolverhampton (left) and Walsall (and Dudley Port) (right); ex-Great Western Worcester – Kidderminster – Stourbridge Jct. – Wolverhampton line; ex-London & North Western line to Walsall, Lichfield and Rugeley. The auto-train has LMS-type Ivatt 2MT 2-6-2T No. 41226 and there is an ex-LNW 0-8-0 at work in the Goods Yard.

A third LNWR service long since disappeared is that over the line from Tipton to Wednesbury, via Ocker Hill.  This line had intermediate stations at Princes End and Ocker Hill, and its length is about 3½ miles.  The service in 1899 was five trains daily, on weekdays only, calling at all stations, and running between Dudley Port and Wednesbury.  These left Dudley Port at 8.33, 1022am, 12.20, 3.26 and 6.50pm, and Wednesbury at 7.53, 1052am, 12.55, 4.00 and6.45pm; the journey time between the two places was 11 minutes.  This was still working in a modified form in 1913, but it was discontinued during World War 1, and passengers from Dudley Port to Wednesbury now use the Great Bridge route.  Another branch now closed is the Harbourne line, in Birmingham, about 4 miles long, closed on November 26th, 1934.

This was the very last passenger working on the branch. Regular scheduled passenger services had ceased in 1934! The line was closed completely a few days later and lifted. ricsrailpics