Railway Lines in the USA

The Oregon Coast Scenic Railroad is a registered non-profit museum organization (501c3). We are an all volunteer organization that operates over the former Southern Pacific and Port of Tillamook Bay Railroads. We operated regularly scheduled trains between Gairbaldi and Rockaway Beach in the summer months and special event trains throughout the year over the rest of the line. Our line extends from the TIllamook Air Museum blimp hangar on the South side of Tillamook through Garibaldi, Rockaway Beach and Wheeler where the tracks turn to the East and head up into the coast range along the remote and breathtaking Nehalem and Salmonberry River canyons. 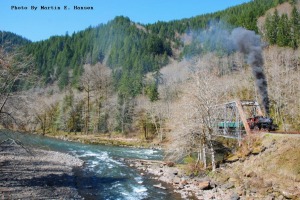 Founded by Scott and Kim Wickert in 2003 the Oregon Coast Scenic Railroad has grown from its humble beginnings dodging freight trains in Garibaldi on weekend runs to Rockaway Beach and Wheeler to the sole operator of 46 miles of the railroad between the Tillamook airport and a point 2 miles east of the railroad siding of Enright in the Oregon Coast Range. The Oregon Coast Scenic Railroad offers excursions operating daily in the summer months and special excursions operating year round. Our schedules and special excursion pages have more details for how to catch a ride on the Oregon Coast Scenic Railroad.
While we have grown significantly though somethings haven’t changed, tickets are still bought onboard the train in the caboose that doubles as ticket office and gift shop. Gifts include shirts, hats, sweaters, toy trains, pins, and much more. While the freight trains are gone, the scenery is second to none.

Our depots in Garibaldi, Rockaway Beach and Wheeler are small covered shelters next to the tracks that were built by the Port of Tillamook Bay to support a basic tourist operation known as the Oregon Coast Explorer prior to the founding of the Oregon Coast Scenic Railroad. The depots are decorated by each of the communities and offer public restrooms nearby. Each depot and community has plenty of activities to offer between train departures.
The Oregon Coast Scenic Railroad has also saved the original Pacific Railway and Navigation (later bought by the Southern Pacific) Depot in Tillamook from demolition and moved it to the Blue Heron French Cheese Company in Tillamook, Oregon where it will once again serve rail passengers for departures out of Tillamook in the future.
We have an extensive equipment roster that includes numerous historic steam and diesel locomotives along with a growing fleet of passenger cars, freight cars, and maintenance of way equipment. All of the equipment and track is operated and maintained by the all volunteer crew of the Oregon Coast Scenic Railroad. If you are interested in becoming a volunteer contact us at info@oregoncoastscenic.org
We hope to see you on board soon. 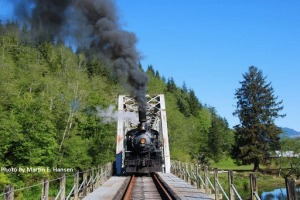