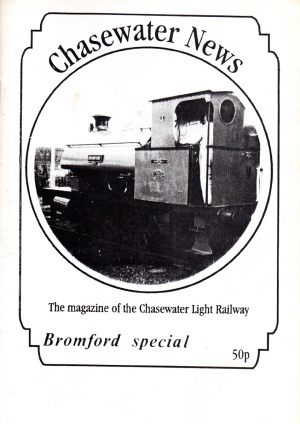 From the Editorial – Nigel Canning

This issue of Chasewater News records our recent visit with ‘Asbestos’ and a brake van to Bromford Tube Works.  The majority of the magazine has been taken up by photos taken by members in an attempt to record the layout of the railway system in the works which has now sadly closed.

A great deal has been happening at Chasewater since the last issue.  Our coaching stock problem has been solved, although it may have created another one – lack of siding space; and track is being laid to the new station, which now has a name.

No.4 Asbestos – This loco got through its visual examination and steam test without problem, although the Inspector did comment on the condition of some of the boiler tubes, and that if any of them failed the entire set would have to be replaced.  As if to emphasise the point, a number of tubes started to leak at Bromford following some energetic running, and have given trouble ever since.

Following renewal of the worst two tubes, the loco ran on Easter Sunday, but failed with further tubes leaking on the Monday.  After that, a further dozen tubes were renewed enabling the loco to run on Bank Holiday Sunday, only to fail again on the Monday.

Enough new tubes have been ordered to renew the entire set, some of which must be in excess of fifteen years old.  Whilst awaiting delivery of the full set, a further twelve have been renewed to enable trains to run at Spring Bank Holiday.

Apart from the tube problem the loco has continued to run well, and due to its being returned from Bromford facing the other way round, looks better hauling trains chimney first in its freshly painted green livery. 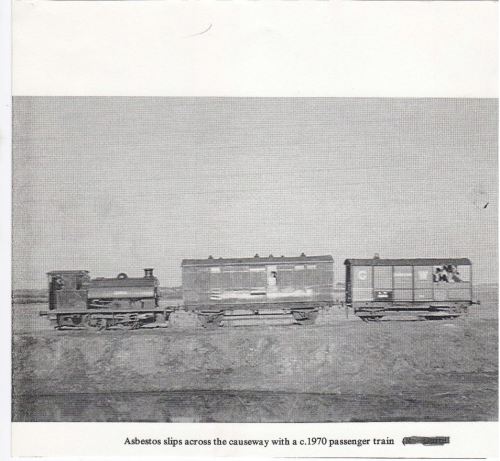 No.5 Sentinel – Very little  progress has been made on this loco due mainly to the amount of work needed to try and keep Asbestos running.  The boiler has, however, now been re-assembled, and the fittings are being refurbished off-site.

S100 – Work has continued on another of the four big leaf springs, the buckle of which was heated to expand it prior to assembly in Asbestos’s firebox. Various bits and pieces of brake rigging have also been fitted to the frames.

Fowler diesel – This loco has remained in service, used for shunting and works trains.

Ruston DL7 – In a surprise operation just prior to Easter this loco was fitted with an exhauster, valves and pipework to enable it to work vacuum braked passenger trains.  Since then it has completed several days of passenger train operation including ’extra’ non-advertised days as well as standing in for Asbestos.  Being unaccustomed to such intensive running, one of the axle boxes began to overheat, requiring stripping and cleaning.  The drive belt for the low voltage dynamo also caused a problem by disintegrating half way down the line.  This was, however, repaired fairly quickly without the train having to be rescued by another loco.  The general public appear unaware of the difference between the diesel and Asbestos, although to be fair, they are both painted the same shade of green and produce roughly similar quantities of smoke when running!

L&Y petrol loco – This loco seems to have been abandoned for the time being with various bits scattered around the station yard and loco shed.  Hopefully the re-assembly will commence shortly!

No.21 diesel – The engine for this loco is awaiting new cylinder head gaskets, and when fitted an attempt will be made to finally get it running again.

New Fowler – This four-coupled diesel mechanical loco appeared on site recently having been acquired from a preservation society in Redditch.  Following an attempt to tow-start the loco, it was found that the fuel injection pump needed repair, and this has since been removed.  Various other components have also been removed for attention so it could be some time before the loco is runnable.

Smith Rodley crane – this vehicle has remained out of use and has been pushed out of the way up No.3 road until a buyer can be found for it.

New coaching stock – At long last replacements for the 2-car Wickham DMU and the recently departed Gloucester trailer have been found and began to arrive at Chasewater at the end of May.  A total of four additional vehicles have been purchased from BR, a centre car and three power cars.

The first of these vehicles, a Pressed Steel Co. motor brake second, W51372, arrived in time to run at Whitsun.  The recent history of this vehicle is quite interesting as it is one of several used by the contractors of the Channel Tunnel and has been through to France.  A maintenance record book found in the drivers’ cab refers to various faults as being at “the French end” of the train.

Ultimately it is intended to retain two of the four for use as a working DMU in BR green livery, whilst the other two will be used as loco-hauled stock.  Hopefully full details of the new stock will be included in the next magazine.

Wickhams E56171 & E50416 – The trailer car remained in service on passenger trains until just before Whitsun, when a vacuum leak in the brake system caused serious problems.  In view of the impending arrival of the replacements it was withdrawn from use.  The power car has also remained out of use.

Payment for the Wickhams has now been received from Llangollen, although a date has not yet been set for their removal from Chasewater.  This is likely to cause a space problem, as with the new arrivals there will be a total of seven DMU cars on site for a while.

Derby centre car W59444 – This coach has remained in service although it has been noticed that the surface of one of its tyres has started to flake away.  Advice is being sought as to whether it can be repaired. 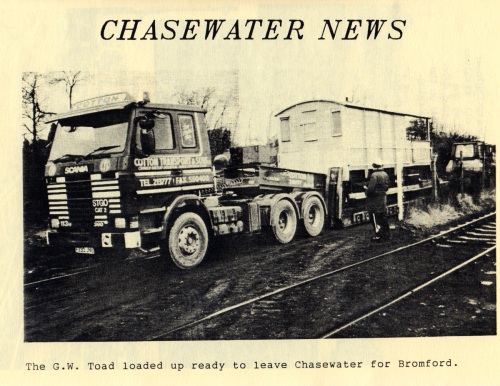 20 ton Great Western Toad – This vehicle was ‘done up’ to run at Bromford Tube with Asbestos.  If nothing else it has benefited from having the rust worn off its brake blocks, as it covered most of the distance at Bromford with its brake screwed hard on!

CRC 4-plank wagon – Progress on the wagon has continued and it now appears to be back in one piece.  Tony Wheeler has started on the paintwork with the intention of finishing it in the livery of the ‘Conduit Colliery Company’.

Great Eastern six-wheel passenger brake – With the coming of better weather Dave Borthwick has started again on painting this vehicle.

Other vintage stock – No work appears to have been carried out on any other vehicles although this situation will hopefully improve during the course of the summer.

Shed Fund – This fund is now well underway so that by the time the route of the motorway is finally settled there may be enough money to make a start on this project.  Meanwhile donations will be gratefully received by the Treasurer, Chris Chivers.