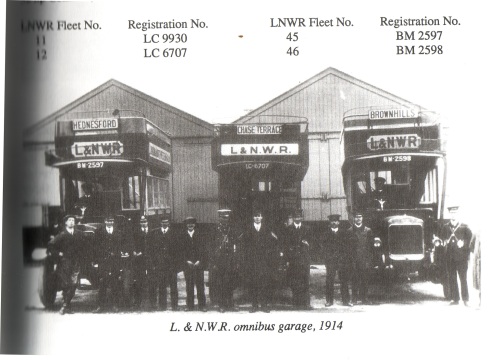 On 1st October 1912 the London & North-Western Railway introduced a bus service between Brownhills, Norton Canes and Hednesford using two Milnes Daimler double-decker buses purchased second-hand 3 years previously from the Associated Omnibus Co., London.
The following year, on the 16th June, a variant of the above service began running via Chasetown and Chase Terrace and additional buses, double-decker Commers were sent to Brownhills (as the one in the photograph).

Painted in standard coaching colours of chocolate and milk, buses carried the company name or initials on the front, back and sides of the top deck and displayed the company Coat of Arms on the sides of the lower deck.
The majority of the LNWR bus services in various parts of England and Wales were withdrawn on 17th April 1915, both Brownhills services included. The decision to withdraw services being brought about by the continued ‘call-up’ of staff for military service and the probability of buses being commandeered by the War Office.

The bus shown, BM2597 was numbered 45 in the LNWR fleet and carried 34 passengers seated.