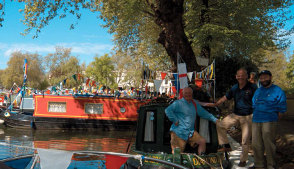 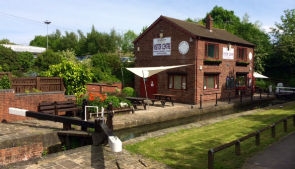 The second Tapton Lock celebration weekend is taking place on the Chesterfield Canal on the 20 and 21 September.
Last year was so successful, they’re doing it all again this year!
Junction Arts and the Derbyshire Countryside Service are offering two days of free activities including art workshops, nature walks, adventure activities and music.
Free parking also. 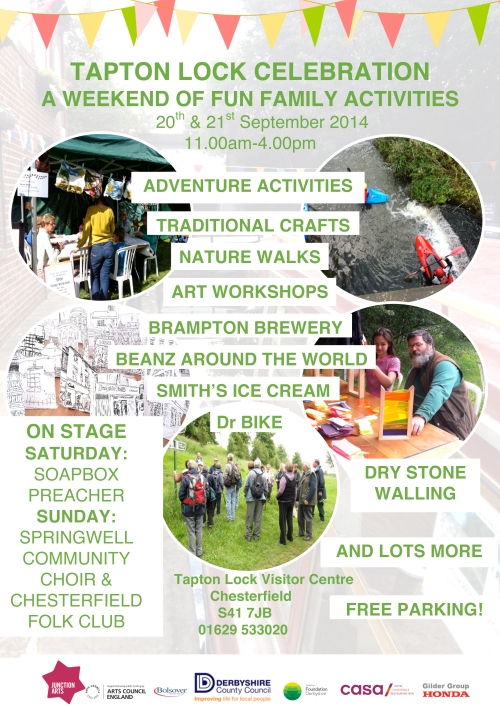 Whitchurch Arm of the Llangollen Canal, photo by Adrian and Gillian Padfield

A boat rally on the Llangollen canal in Whitchurch.
A boat rally on the Whitchurch Arm of the Llangollen Canal. The theme for boat decorating this year is ‘The Horse’. Entertainment includes stalls, food, trading boats, a dog show, second-hand book stalls and more. You will need to book if you want to tie your boat in the Whitchurch Arm, otherwise the event is free.
For more information visit: http://www.whitchurchwaterway.org.uk/boatrally2014

Across the Pontcysyllte Aqueduct

A cruise along the Llangollen Canal organised in conjunction with Wicksons Travel of Walsall Wood, Staffordshire.  An hour in each direction on board the narrowboat ‘Thomas Telford’ crossing the aqueduct each way.

Canal News – Advice re Hedgecutting, and Cycling along the Canal 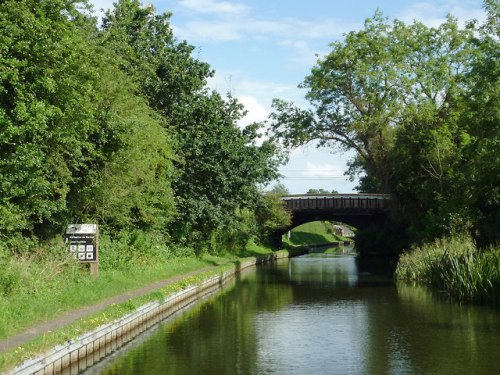 Catherine de Barnes Bridge, No 78 is ahead. Visitor moorings here are good. The pub is more of a restaurant with bar, but does still serve real ale.  © Copyright Roger Kidd and licensed for reuse under this Creative Commons Licence.

We have commenced the annual hedge cutting round, starting on the 1st October running until 1st March. Please be aware this work will result in thorns on towpaths. The specification includes the clearing of cut thorns from the tow path following a cut of the previous year’s growth, our contractors will blow/sweep/rake/clear the thorns off the path, however there will be areas where some thorns remain on the towpath or blow from the hedge onto the towpath following windy conditions. If you are planning a cycling trip please follow link http://www.waterscape.com/things-to-do/cycling/hints-and-tips for helpful tips. If you have a pet be mindful of tender paws picking up thorns on the path and under the hedgerows following this work. 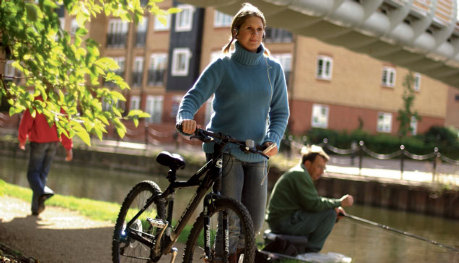 Cycling along the Grand Union Canal

Cycling is a great way of seeing our network of canals and rivers and getting some exercise at the same time. If you’re planning a day out on your bike why not incorporate our canals into it? Our towpaths offer traffic free routes next to some of the country’s most stunning waterside scenery.

Our canals and rivers attract over 21 million visits from cyclists each year and with thousands of miles of towpaths, which by their nature tend to be fairly level, it’s easy to see why. Where else can you take in such a diverse range of wildlife and the country’s finest heritage structures while you’re out on your bike?

Providing green corridors through our cities and linking our towns and villages together, canal towpaths are used by a range of cyclists from boaters running errands on their bike to experienced cyclists on week-long tours and families taking an afternoon ride together. 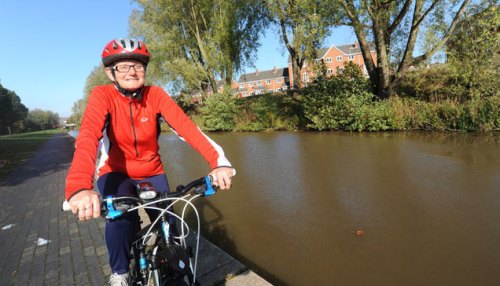 Cycling by the Trent & Mersey Canal

The Canal & River Trust welcomes considerate cyclists to its towpaths and you don’t need a permit to use your bike on any of our towpaths. However, we would ask that you take a look at our Greenways Code for Towpaths before you take to the towpaths. Lots of people visit the waterways, for many different reasons, and everyone is entitled to feel happy and safe whilst they’re visiting.

The undated plaque nearby says: “Built by Thomas Telford 1795-1805 there are 18 piers made of local stone, the central ones over the Dee being 126′ high up to the ironwork.

The canal runs through an iron trough, 1007′ long, 11’10” wide and 5’3″ deep, the largest in Britain. The iron was supplied by William Hazeldine from his foundries at Shrewsbury and nearby Cefn Mawr.  Total cost £47,000.  Water is fed from the Dee at the Horseshoe falls at Llantysilio near Llangollen.”  © Copyright Peter Craine and licensed for reuse under this Creative Commons Licence.

A flat canal, tow path cycle route which takes you from the beautiful Welsh tourist town of Llangollen to the world famous Pontcysyllte Aqueduct.

This route is not recommended for road bikes, as the tow path is mainly a crushed gravel surface with some tarmac stretches along the way. Make sure you take care when cycling near water and give way to pedestrians.

Llangollen is a beautiful welsh tourist town standing on The River Dee with Castell Dinas Bran standing high above the town. The bridge in the centre of the town which crosses the River Dee was built in 1345. Llangollen also has a fantastic steam railway which runs daily in the holiday season up and down the banks of The River Dee.

Start from Heoll y Castell (the main high street in the town).

2. Llangollen to the Wharf Hill

Cycle across the Llangollen Bridge, over the River Dee, away from the main town centre. At the end of the bridge, turn right on to Mill Street and, after 50 yards, turn left up Wharf Hill, which is a very short steep hill. You might like to walk this short section.

After 100 yards, you will be cycling along the towpath past a wooded area and then you will be cycling out in the open countryside along the canal and under several bridges. The canal roughly follows the route of The River Dee as it meanders along its way, which is over on your right hand side.

After about four miles you will reach Pontyscyllte and will come out at the canal basin by the aqueduct.

Cross over the bridge to the other side of the canal and cycle across the world-famous Pontcysyllte Aqueduct, which is now a world heritage site. It was built in 1805 by Thomas Telford, is 1,007 ft long, and 126 ft high and you can enjoy some fantastic views of the surrounding area from the aqueduct. 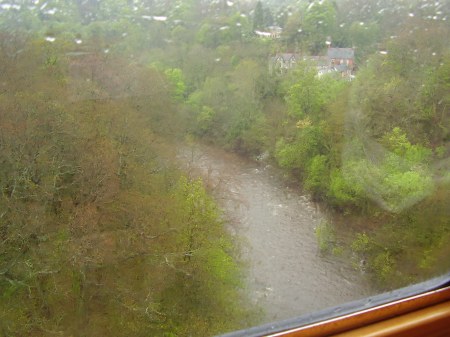 Also available when the sun shines!!

Thomas Telford’s magnificent Pontcysyllte Aqueduct has been named as one of the alternative modes of transport that will be used during the London 2012 Olympic Torch Relay. The aqueduct is one of just a few landmarks on the route of the Olympic Flame announced today by the London Organising Committee of the Olympic and Paralympic Games (LOCOG). The Olympic Flame will travel over the aqueduct on 30 May 2012.

The Pontcysyllte Aqueduct is a 38 m high and 307 m long navigable aqueduct that carries the Llangollen Canal over the valley of the River Dee in Wrexham in north east Wales. Completed in 1805, it is the longest and highest aqueduct in Britain, a Grade I Listed Building and a World Heritage Site.

© Copyright Helmut Zozmann and licensed for reuse under this Creative Commons Licence.

Vince Moran, British Waterways’ operations director, said: “We are delighted that the Pontcysyllte Aqueduct and Llangollen Canal World Heritage Site is to form part of the London 2012 Olympic Torch Relay Route. It is great to see that such a unique part of the UK’s heritage will be involved in this momentous occasion in the same year that the canals and rivers in England and Wales are set to be put into trust for the nation.”

Sebastian Coe, Chair of LOCOG said: “We have worked hard to devise a route that achieves proximity to people while taking in the diversity of the UK’s landscape and landmarks. By taking in this area and Telford’s alternative mode of transport we are doing just that. This is the UK’s moment to shine and I want to encourage people across Wrexham to start planning how they can be part of this once in a lifetime opportunity and show their support for the inspirational torchbearers.” 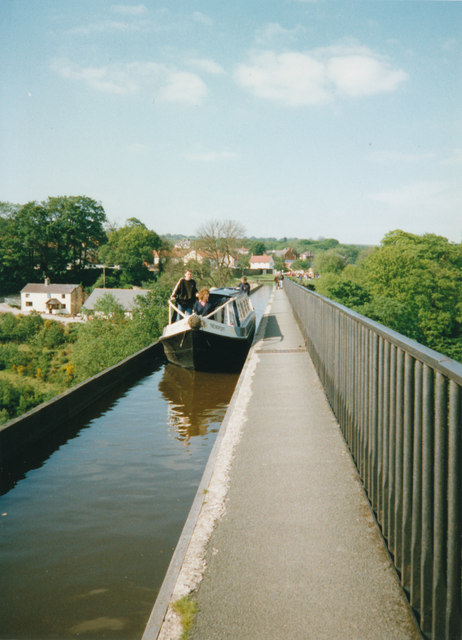 Completed in 1805, it is the longest and highest aqueduct in Britain, a Grade I Listed Building and a World Heritage Site.

© Copyright Graham Hogg and licensed for reuse under this Creative Commons Licence.

The 70-day Olympic Torch Relay will start at Land’s End, Cornwall on the morning of 19 May 2012. The Olympic Flame will travel an estimated 8,000 miles around the UK, giving thousands of communities and individuals their moment to shine. It will end by travelling down the River Thames to the Olympic Stadium, arriving on 27 July 2012 for the Opening Ceremony of the Games.

It has also been confirmed that the torch will travel by canal boat through the Black Country Living Museum on the Dudley Tunnel Branch on 30 June 2012.

Dudley Tunnel on the Birmingham canal is not open to craft powered by internal combustion engines. This electrically powered tour boat is emerging stern first.
The narrow tunnel was completed in 1792 and is 3154 yards in length.

© Copyright Stuart Logan and licensed for reuse under this Creative Commons Licence.

A two-day course in making traditional fenders for canal boats.

During the weekend students can make two side fenders, a short button, a deck matt and have a go at splicing mooring lines. All materials provided. 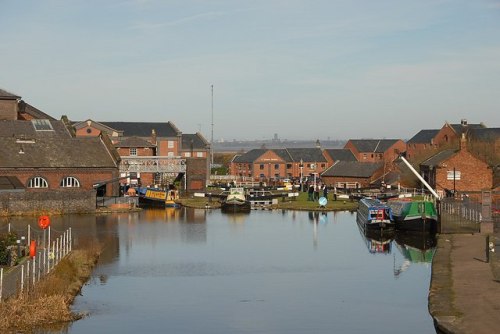 The National Waterways Museum has displays featuring old boats and artifacts illustrating life in bygone times on the waterways of England.

The city of Liverpool can be seen in the far distance on the other side of the River Mersey.

© Copyright Galatas and licensed for reuse under this Creative Commons Licence.