To the resourceful publicity department of the Great Western Railway  (GWR) jigsaws were yet another opportunity to put the letters GWR in front of the public.

From 1924 onwards passengers could pass the hours with a jigsaw purchased from the station bookstall.  As well as jigsaws depicting GWR locos and trains, the 44 produced also include places served by the company and historic scenes connected with the area.

The first puzzle, of GWR 4-6-0 No.4073 Caerphilly Castle, was produced in time for the British Empire Exhibition at Wembley in 1924 where the locomotive was on display.  Initially the 150 piece jigsaw was sold for 5 shillings (25p), but a month later the price was reduced to 2s 6d (half-a-crown or 12½p). The price only just covered the cost but publicity rather than profit was the object. 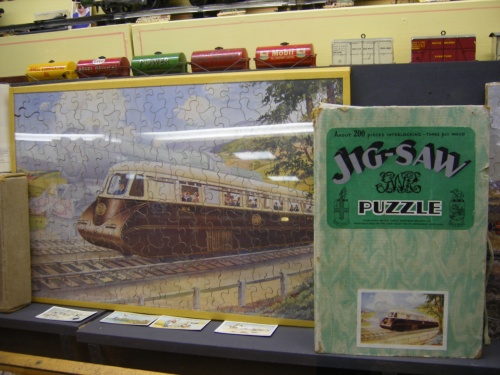 Two particular favourites with collectors are the double-sided puzzle of 1926 depicting Exeter Cathedral on one side and a map of the GWR system on the reverse, and a pair of puzzles in one box – one taken from a Frith painting, ‘The Railway Station‘ and the other a ‘View of Paddington Station‘.

All the puzzles were manufactured for the GWR by Chad Valley in Birmingham; they came in attractive boxes with a coloured print of the subject within.  The original puzzles were sold in boxes with lift-off lids, and in the 1930s in book boxes.