Incorporated on 25 June 1864, this was the first
standard gauge branch of the GWR. It failed to reach the length authorised (9 miles), stopping short of Wallingford and abandoning the river crossing. Opening on 2 July 1866, the line was worked by the GWR, which bought the Company for £16,750 under an Act of 25 July 1872. The line was closed on 1 June 1981, and is the site of a preservation scheme, the Cholsey & Wallingford Railway, now authorised to run into Cholsey station. 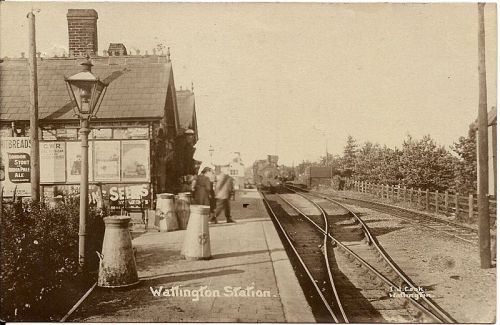 The Cholsey and Wallingford Railway Preservation Society (C&WRPS) aims to preserve the branch as a Heritage Railway. After years of hard work by our members, the line is now open all the way from the main line station at Cholsey to Wallingford and passenger services have been restored. Acheivements include the relaying of various sections of track and sucessfully preserving the line into Wallingford when the new town bypass was built.

In addition to the regular maintainance and restoration of the line and its rolling stock, the Society is now chanelling its efforts into the re-development of the Wallingford station site. A major project to improve the permanent way is also currently underway, to ensure the line continues to be fit for passenger trains. More members are needed to help with this major project. See the membership page and volunteer today!

The current Wallingford end of the Cholsey and Wallingford Railway, with locomotive 701.
Date  1 April 2005
Author  Chris Wood  Copyright (c) 2005 Chris Wood. Uploaded by the copyright holder under the terms of the GFDL (see below).
Licensing  This file is licensed under the Creative Commons Attribution-Share Alike 3.0 Unported license.

After spending some time at Cholsey & WallingtonRailway, ‘701’ went to Chasewater Railway in Staffordshire, appearing firstly as 701, then in GWR livery and finally in NCB colours.