The Amtrak Exhibit Train offers a free, self-guided tour of exhibits, artifacts, and Amtrak memorabilia. Pulled by a diesel-electric locomotive, there are three display cars and a gift shop car at the end of the train.

The visit coincides with the 9th Annual Cheyenne Depot Days. Built by Henry Van Brunt for the Union Pacific in 1886, the depot was donated to the City of Cheyenne and Laramie County in 1993. The Cheyenne Depot Museum, via walk-thru exhibits, provides the history of Cheyenne from the arrival of the transcontinental railroad. This writer visited the museum in 2013 and the detail and lay-out are very impressive.Cheyenne, Wyoming, has been very much an intersection for the railway world of late. On May 8th, the steam train Big Boy 4014 arrived from California to be rebuilt in the local Union Pacific steam shop for future use as an excursion train. Additionally, the upcoming fourth season of AMC’s Hell on Wheels, which dramatizes the building of the first transcontinental railroad, will begin with the historic Cheyenne founded in 1867.

A postcard depicting a General Motor’s Aerotrain. From the back of the card: The New York Central System “The Road to the Future.” A General Motors “Aerotrain” is shown on display here at Buffalo, New York in Feb. of 1956. The train failed in regular operation and was in service on the Central less than a year. It was part of a futile effort to upgrade passenger service. Similar units were used briefly on the Pennsylvania and the Union Pacific Railroads. By 1969 the Road to the Future had proved to be the Road to Ruin. The card was distributed in 1970 by Owen Davies, Bookseller. 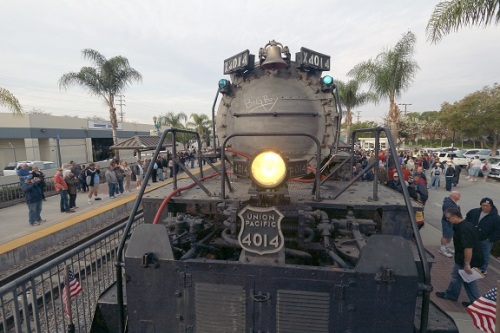 As the sun came up in Covina, Calif, the crowds came out to welcome UP’s Big Boy No. 4014 as it made a stop on its way to Colton, Calif.

It was a historic day for Union Pacific’s steam program. After months of preparation, UP’s Big Boy No. 4014 returned to the national rail network in the early morning hours of Jan. 26, 2014, to the applause of the hundreds of rail fans on hand to experience the moment.

The mammoth steam locomotive departed its former home at the Los Angeles County Fairgrounds in Pomona, Calif., at around 1:45 a.m. Pacific Time, to begin its 56-mile trek on Metrolink and Union Pacific track to UP’s Colton, Calif., rail yard.

“The move went off flawlessly,” said Ed Dickens, senior manager of UP’s Heritage Operations. “We came into Covina very carefully and methodically. We were prepared to deal with little issues, but those issues didn’t materialize.”

While the Big Boy had been thoroughly prepared and inspected prior to the move, Dickens said there are some parts inside the engine that are simply impossible to carefully inspect. “We have little access to those huge roller bearings, which have been sitting since 1962,” he said. “The good news is that they reside in a semi-sealed environment.”

The equipment used to move the mammoth locomotive included two diesel locomotives and 10 freight cars used for braking. As part of the operation, the train also delivered UP diesel locomotive No. 3105, a UP caboose and UP boxcar to RailGaints museum, where they will become part of the museum’s permanent display.

Dickens said the crowd on hand to see the Big Boy return to live rail operations was enormous. “The huge crowd was literally pressed against the chain link fence,” he said. “The mood was very happy and very vocal, with lots of clapping. It was really a magical moment as the Big Boy was pulled backward by the UP 1996, the Southern Pacific heritage locomotive, from our holding track to Metrolink’s track.”

Top speed during the move was 20 mph. Dickens said the operation was completed by 4:30 p.m. with the arrival of No. 4014 to Colton Yard, where it will remain over the coming months before its move to Cheyenne, which has yet to be scheduled.

The public is invited to view Big Boy No. 4014 in Colton Yard Feb. 1-2 and 8-9 from 9 a.m. to 4 p.m. Colton rail yard is a busy ’round-the-clock operation. Because of safety concerns access is limited.