This was the last of the twelve BR standard designs to appear, the first example of which came out in 1954. A large 2-10-0 engine intended in the main for heavy freight traffic, these locomotives have on occasions been used with considerable success on passenger trains, although not as a regular thing. A speed of 90 mph has been recorded on at least one occasion, an extraordinary figure for a ten-coupled engine with wheels of only 5’ 0” diameter.
In all 251 engines of this class have been turned out, Nos.92000 – 92250. The final one actually built was No.92220, which appeared from Swindon in March 1960, and was appropriately named ‘Evening Star’. This was the last new steam locomotive constructed for British Railways.
Nos.92020-9 were built experimentally with Franco-Crosti type double boilers, a peculiarity of these engines being that the chimney is only used when the locomotive is being lighted up from cold, the normal exhaust coming from a separate outlet midway along the left hand side of the boiler. No.92250 was fitted with an experimental type of chimney embodying a device known as the Giesel ejector. This has been used extensively in Austria, and is said to give remarkable results in economy of coal consumption. 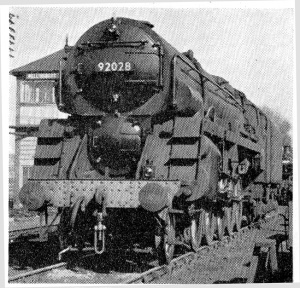 Unfortunately this invention appeared too late on the scene to result in any appreciable prolongation of the life of the steam locomotive in this country. That it is by no means due for an early extinction, however, is shown by the fact that even when the present modernisation plan is complete there will still be at work a total of about 7000 steam engines on British Railways (1959).
Driving wheels – 5’ 0”, Cylinders (2) – 20”x 28”, Pressure – 250 lb., Tractive effort – 39760 lb., Weight – 86 tons 14 cwt (The Crosti boiler engines weigh 90 tons 4 cwt), Classification – 9F 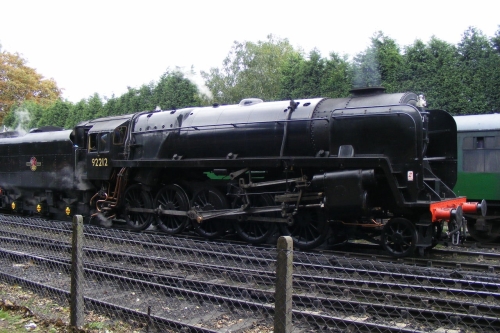 No.92212 at Bridgnorth.  Photo by David Jackson 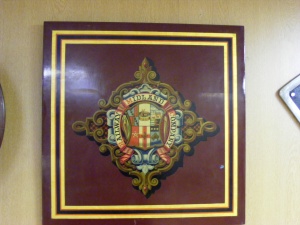 The early railway companies went to great lengths to give themselves status and authority.  This was partly to reassure investors and the travelling public alike since both were initially sceptical of railways and railway travel.  Th achieve the desired effect, companies often used heraldic devices on their coats of arms and seals, even though few were officially entitled to use them.

The company armorial device appears on small items such as badges and buttons, headed notepaper and publications through to ornate ironwork supporting platform canopies and stonework at major stations.  But to the collector one of the favoured items is a genuine railway company armorial transfer, usually attractively mounted on a wooden plaque or backing.

Transfers were introduced in the 1850s by Tearne and Sons Ltd of Birmingham, offering the emerging railway companies an easy method of branding their rolling stock.  Soon locomotives and carriages were suitably embellished with the grand coat of arms belonging to the parent company.

The railway companies took liberties when it came to the heraldic devices they chose to use.  For example the London & North Western Railway (LNER) made free use of the national symbol Britannia.

Although railway companies had consulted the College of Arms about the design of their coats of arms, it was not until 1898 that arms were officially granted.  This was awarded to the Great Central Railway, formerly the Manchester, Sheffield and Lincolnshire.

After the Great Central’s achievement only four other transport companies were awarded armorial devices – the London & North Eastern Railway (LNER), the Southern Railway (SR), the British Transport Commission and the Ulster Transport Authority.

British Railways’ full armorial bearings included a crest (beneath a ‘Forward’ scroll) of a demi-lion on its hind legs clutching a wheel between its paws, while two further lions held the shield.  The three wheels at the top  railways, a portcullis and chains stood for ports and harbours, and straight and wavy lines represented road, rail and waterways.  Below this was  a further scroll ‘Velociter securiter‘: swift and sure.

The crest, replacing an earlier ‘lion and wheel’ device (also known as ‘ferret and dartboard’) was adapted by BR for use as a transfer on carriages and locomotives.  This design  survived until the introduction of the BR twin arrows emblem.  Chrome finished BR crests used on some 1960s electrics are popular. 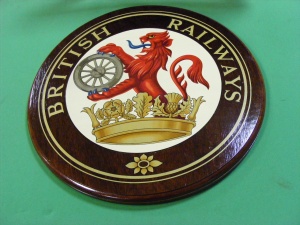