The History of the Wotton Tramway 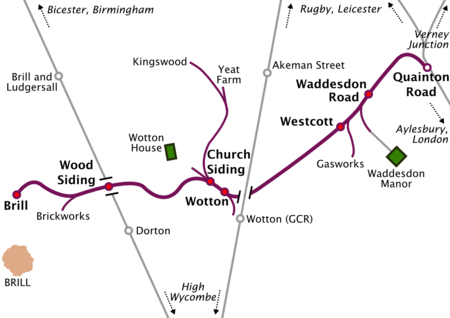 This file is licensed under the Creative Commons Attribution-Share Alike 3.0 Unported license.

The line was opened by the Duke of Buckingham as a private venture in 1871 to convey workers on his estate to Wotton.  Construction started at Quainton Road being opened as far as Church Siding, in 1871 and one year later further extensions took the line to Brill after the townsfolk had petitioned for a passenger service.  This was duly inaugurated and two Aveling Porter geared locomotives were purchased from the makers for motive power over the line.  These curious machines were more like traction engines with flanged wheels, each had a single overslung cylinder 7¾” X 10” connected through the countershaft and pinion to further pinions on the axles.

The first to arrive was No.807 in 1872, and No.846 followed later the same year, the cost being £400 each.  Their maximum speed was about 8 miles per hour.  The early timetables show a time of 95 – 105 minutes for the 6½ mile journey, this being an average of no more than 4 miles per hour.  The trains were mixed and ran daily and there were additional freight trips if required.  Watering facilities were in the Church Sidings and turntables were situated in Quainton and Brill, and on the Kingswood Branch.  The engines seemed to have worked more satisfactorily chimney first.  Horses were still used for shunting and light duties, they also worked the three short branch lines. 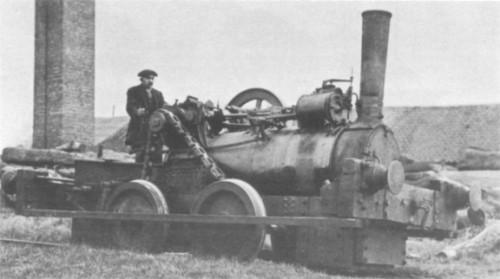 In the month of December 1876 a new engine arrived, this was an 0-4-0ST named ‘Buckingham’ built by Bagnall’s Ltd. of Stafford, it was followed a year later by another 0-4-0 ‘Wotton’. Buckingham was that first loco on Bagnall’s lists.  It was very unlikely that either were ever built at Stafford because facilities for standard construction were not available at the factory at that time.  Little is known about these locomotives and their purchase at a total cost of £1,240, as for the Aveling & Porter locos, these remained in traffic until 1894, as traffic on the line never justified four locos, and with such a tiny wooden engine shed at Brill.

When it was proposed to extend the line from Brill to Oxford it was announced that the name would be ‘Oxford, Aylesbury and Metropolitan Junction Railway’.  It was then altered to ‘Oxford & Aylesbury Tramroad Company’.  At one stage of the proceedings electric traction was thought of, but this fell through. The Company then bought two new steam locos, these being supplied by Manning Wardle Ltd.

Manning Wardle locomotive Huddersfield at Quainton Road railway station: the photograph was published in The Locomotive Magazine Vol III, No. 35, November 1898, and on p. 168 of the compilation

The first, ‘Wotton No.1’ was originally named ‘Huddersfield’ and was built in 1876, the second ‘Brill No.2’ was bought new from the makers and had a covered cab, in place of the weatherboard on the sister loco.  In 1899 the loco was replaced by a new Manning Wardle named ‘Wotton No.2’.  The inside cylinders were 12” x 17” and with 3’ driving wheels, the weight of the locos in working order was about 18 tons.

The two newest locos remained in service on the line when the Metropolitan Railway took over in 1899, these two together with two coaches and one wagon cost the Company £2,375.  The two Manning Wardles were sold, one of them surviving for many years in the stock of a Civil Engineering Contractor, and replaced by Sharp Stewart Tank locos.  The Aveling Porter locos were withdrawn in 1894 and were sold to a brickworks at Nether Heyford, Northamptonshire.  No.846 failed its boiler test soon afterwards and was dismantled for spare parts for the other loco which survived until 1940 on the closure of the brickworks.

It was then rescued by a band of enthusiasts in 1951 and went to Neasden Works where it was restored to its original condition by London Transport.  No.807 now rests at Clapham Museum as a reminder of the early days of the line, once part of the ‘Underground’ system.

Aveling and Porter was a British agricultural engine and steam roller manufacturer. Thomas Aveling and Richard Thomas Porter entered into partnership in 1862, developed a steam engine three years later in 1865 and produced more of the machines than all the other British manufacturers combined.

Thomas Aveling was born at Elm, Cambridgeshire, in 1824 and was apprenticed to a farmer where he had the opportunity to familiarise himself with the new steam-powered farm machinery of the time. In 1851, Aveling’s interest in engineering led him to set up a business in Edward’s Yard, Rochester, with his father-in-law producing and repairing agricultural machinery. In 1856 they produced the first steam plough. In 1860, the business moved to Strood, on a site adjacent to Rochester Bridge

In partnership with Porter, the steam roller they produced in 1865 was tested in Military Road, Chatham, Star Hill in Rochester and in Hyde Park, London. The machine proved a huge success. Aveling and Porter steam rollers were exported to Europe and as far afield as India and North America.

In 1933, Aveling and Porter combined with Barford & Perkins to form Aveling-Barford which continued to make steam and motor rollers. The rescue, part-funded by Ruston & Hornsby of Lincoln, involved the firm moving to Grantham, Lincolnshire, from the Rochester site. After World War II the company continued to make motor and steam rollers as well as expanding into other construction equipment.

Aveling Barford is now part of the Wordsworth Holdings Group, a family owned company. The company is based in Grantham, and still trades under the name ‘Barford’ which uses a modern version of the Aveling-Barford ‘prancing horse’ logo. Barford manufacturers and sells a wide range of site dumpers.

Aveling & Porter built more steam rollers than all the other manufacturers combined. They also built traction engines and steam wagons.

Another example of Aveling and Porters engineering skills can be seen in the massive covered slips at Chatham Dockyard. These Leviathans of steel pre-date the great London train sheds of St. Pancras, King’s Cross and Paddington—traditionally understood to be the oldest and largest steel framed structures of the time.

Two Aveling and Porter products are found in The Railway Series books by the Rev. W. Awdry and the TV Series based on the books: George the Steam Roller and Fergus the Railway Traction Engine.