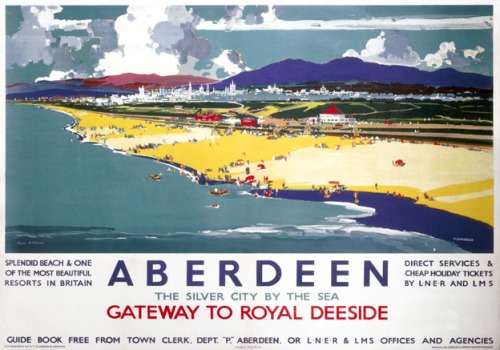 The Aberdeen Railway was a railway that ran mainly along the North East coast of Scotland south from Aberdeen to Guthrie on the Arbroath and Forfar Railway. There were branches to Montrose and Brechin.

Incorporated on 31 July 1845 for a line from Guthrie (Arbroath and Forfar Railway) to Aberdeen, with branches to Brechin and Montrose, it was promoted by  Great North of Scotland Railway supporters, who arranged for amalgamation should it be thought appropriate.  However, by the time half the capital was paid up and spent, the Companies had drawn apart.  It was worked by the Scottish Central Railway between 12 May 1851 and31 July 1854, and the Company amalgamated with the Scottish Midland Junction Railway on 29 July 1856 to form the Scottish North Eastern Railway, connecting Perth to Aberdeen. This latter company was absorbed by the Caledonian Railway on 10 August 1866, which in turn became part of the LMS on 1 July 1923.

The station currently standing was built as Aberdeen Joint Station between 1913–16, replacing an 1867 structure of the same name, on the same site. The station and the new Denburn Valley Line enabled the main line from the south and the commuter line from Deeside to connect
with the line from the north. The lines from the south had previously terminated at the adjacent Aberdeen Guild Street. Even this had not been Aberdeen’s first railway station, that distinction belonging to a previous terminus a short way south at Ferryhill. After the construction of the Joint Station, Guild Street Station became a goods station. Some of its tracks remain, but the vast majority of the site was cleared in 2005.

This image was taken from the Geograph project collection. See this photograph’s page on the Geograph website for the photographer’s contact details. The copyright on this image is owned by Stanley Howe and is licensed for reuse under the Creative Commons Attribution-ShareAlike 2.0 license.