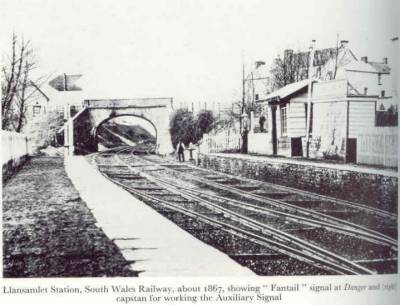 Incorporated on 4 August 1845, this was supported by the GWR, which was aiming at Ireland. Its first section (Swansea-Chepstow, 75 miles) opened on 18 June 1850. The building of Brunel’s bridge across the Wye delayed opening east to Gloucester until September 1851 (the Company was authorised in 1847 to lease or buy the Forest of Dean Railway, and western extensions opened to Carmarthen on 11 October 1852, to Haverford West on 2 January 1854 and to Neyland on 15 April 1856. The line was leased to the GWR in 1846 at a guaranteed 5% and amalgamated with effect from 1 August 1863. Broad gauge, however, did not suit the valley lines, for which sharp curves were often necessary, and by 1866 freighters were petitioning for conversion; this had reached Cardiff by 1872.
The line now forms part of the South Wales Main Line and Gloucester to Newport Line. 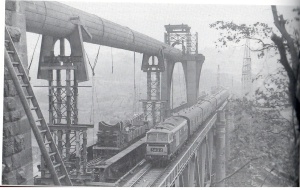 Another Brunel Relic, this time the bridge across the River Wye at Chepstow, opened by the South Wales Railway in 1851. An up train crosses during rebuilding in 1962 (Rev W.Awdrey)