6229 Duchess of Hamilton as first built

Following the success of the ‘Princess’ class Pacifics an improved design was put in hand, and five engines appeared in 1937 for working the newly inaugurated high-speed service between London and Glasgow. The heating surface, cylinders and piston valves were enlarged, and the driving wheel diameter increased to 6’ 9”, but the most striking change was the fully streamlined casing, which while impressive was also aesthetically extremely ugly. The engines were also painted a bright shade of blue with horizontal white bands to match the new train, which was similarly adorned. Nos.6225-9 which followed, were, however, painted in standard LMS maroon. The next batch, Nos.6230-4, were non-streamlined and presented a handsome appearance. Further additions to the class were Nos. 6235-48, all streamlined, and finally, between 1944 and 1948 there came Nos. 6249-57, without streamlining. No.6256 was named after its designer, Sir William Á. Stanier, F.R.S. This, and No.6257 had roller bearings. The outer casing was removed from all the streamlined engines, as it was found to be of little value at speeds below 90 mph or so, and was a nuisance to the maintenance staff as it rendered parts of the engine somewhat inaccessible. To combat the trouble of drifting steam over the cab, all the class was fitted with smoke deflectors, but strangely this was never found necessary with the earlier ‘Princess’ class.

Prior to the introduction of the ‘Coronation’ flier in July, 1937, No.6220 was tried out with a special train and attained 114 mph just south of |Crewe, thus beating the record of 113 mph at that time held by the LNER.
The ‘Coronation’ class have since shown themselves to be magnificent engines, not only in the realms of speed, but in their ability to handle very heavy expresses over the West Coast route. On test in 1939, No.6234, then newly fitted with a double chimney, worked a train of twenty coaches, 610 tons behind the tender, between Crewe and Carlisle, 102 miles in 118 minutes. This included of course the ascents of Shap and Beattock. All were still in service in 1959, as BR Nos. 46220-57, although beginning to be displaced by diesels on many of the top link workings. 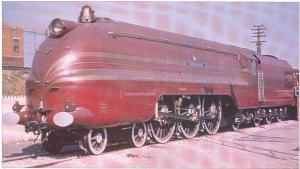 ‘Duchess of Hamilton’ dressed up as ‘Coronation’

In January, 1939, No.6229 ‘Duchess of Hamilton’ was sent on exhibition to New York, and later made an extended tour over the USA railways. It was still there when the Second World War broke out, and was not returned to this country until 1943. During this time it had exchanged numbers and nameplates with No.6220 ‘Coronation’, but these were altered back on the engine’s return. This was a great mistake, as many American servicemen in this country, seeing the real 6220, were naturally under the erroneous impression that it was the same locomotive which had toured their own native land.

Duchess of Hamilton in the NRM 2014