When the question of providing a high-speed service between London and Newcastle in the early 1930s was being mooted, the question of utilising a diesel-electric train was at one time seriously considered, but as this would have given neither the desired standard of comfort nor the required speed, the idea was dropped. It was decided to use conventional type of rolling stock with steam propulsion and a certain amount of streamlining to reduce wind pressure at the high speeds contemplated, as Sir Nigel Gresley assured the directors that he could produce an engine and train which would amply cover the requirements. His ‘Silver Link’, which appeared in 1935, was in effect an improved version of his already successful ‘Pacific’ design, but greatly altered in appearance. The now familiar wedge-shaped streamline casing was certainly startling at the time.
The first four engines, Nos.2509-12, soon showed themselves fully capable of doing all that was required, and in 1937 further examples were built for working the even more ambitious high speed non-stop ’Coronation’ between London and Edinburgh. Eventually the class consisted of 35 engines, Nos.2509-12, 4462-9, 4482-4500 and 4900-3. No.4498 was named ‘Sir Nigel Gresley’ after its designer. 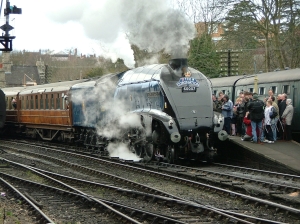 The exploits of these remarkable engines is comparatively recent history and needs no repetition here, but the 126 mph speed attained by No.4468 ‘Mallard’ in July 1938 remains to this day a world record for steam which can be substantiated. A claim of 127 mph by a Pennsylvania ‘Atlantic’ in 1905 seems to have been based upon somewhat flimsy evidence and can hardly be accepted.

No.4469 was destroyed at York in 1842 in an air raid, but the remainder were renumbered 1-34 in 1946 although not in chronological order. They duly became BR 60001-34 and were still in service in 1959. In recent years the valances over the driving wheels have been cut away to give easier access to the motion, and most of them have now Kylchap blast pipes and double chimneys, which were originally fitted to Nos.4468 and 4901-3. 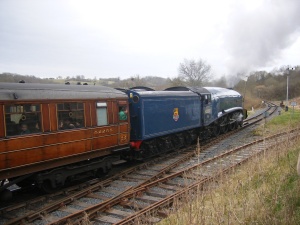