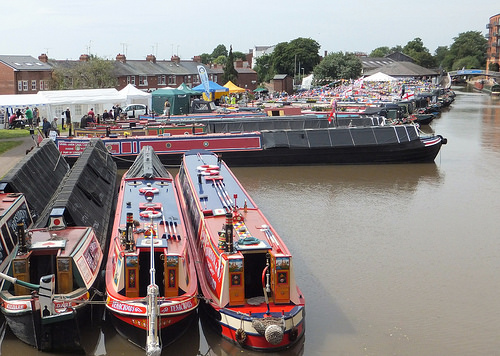 With over 120 gaily decorated craft and thousands of people enjoying the sunshine, The Inland Waterways Association’s (IWA) National Campaign Festival in Chester, which took place 6th – 8th June, was a spectacular event. Never before had so many boats, from all over the country, been assembled in the basin at Tower Wharf to support IWA Chester and Merseyside Branch’s campaign to re-pair and re-open the River Lock leading onto the River Dee.

The festival was opened by the Lord Mayor of Chester, Cllr Bob Rudd, who acknowledged that Chester had been left behind in making the most of its local waterways, and promised that the newly launched Chester Waterways Strategy would be acted upon.

Both IWA and Chester Canal Heritage Trust members have worked with Canal & River Trust, Cheshire West and Chester Council to develop a vision for Chester’s canal and river connection which they believe would be the catalyst for growth and regeneration in the area.

IWA Chester & Merseyside Branch also organises regular work parties in the basin at Tower Wharf to carry out work such as painting, weeding and litter-picking. The branch has amassed over 200 volunteer hours since they started work in September 2013 and has made a visible difference to the area.