Published on Monday, 7th April 2014
The ribbon was cut, officially opening Beacon Park’s new skatepark, on Saturday 5 April 2014.
Project funders and supporters, as well as keen skaters, assembled at Beacon Park’s new skatepark on 5 April to see Lichfield District Council’s Chairman cut the ribbon to officially open the completed facility.
Councillor David Leytham, Chairman of Lichfield District Council, said: “It’s so important that young people have venues available to encourage them to go outside and get active, so it gave me great pleasure to launch Beacon Park’s fantastic new skatepark. I am sure it will be enjoyed by generations of skaters for many years to come, and I hope everyone takes pride in it and helps us to keep it a pleasant place for all.”
Following the ribbon cutting, the crowd was treated to skating display by Gravity pro skaters.
Councillor Andy Smith, Lichfield District Council’s Cabinet Member for Leisure & Parks, commented: “The skating was amazing and really showed what can be achieved on the ramps, after plenty of practice! Well done to the skaters and, on behalf of the council, we thank everyone who has helped to fund the skatepark and supported the project.”
Beacon Park’s £145,900 skatepark was funded by section 106 capital and contributions, The Veolia Environmental Trust, Lichfield City Council, Staffordshire Local Community Fund, and Lichfield District Safer Community Partnership. Lichfield District Council also contributed towards the landscaping.
Paul Taylor, Executive Director of The Veolia Environmental Trust, said: “Over the last five years we have awarded £486,546 through the Landfill Communities Fund to community and environmental projects in Staffordshire, and it is always great to hear about the opening of one we have supported. This facility will bring a range of health and social benefits to the community of Lichfield and I hope it is used and enjoyed for many years to come.”
The skatepark is regularly inspected, but if anyone has any concerns, they can contact the council’s parks team on 01543 308867 or email parks@lichfielddc.gov.uk 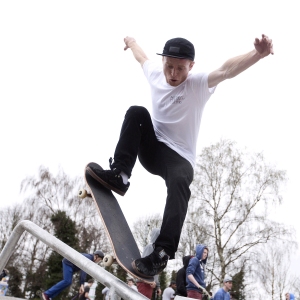 Published on Monday, 7th April 2014
Project partners raised a glass to celebrate the completion of a makeover project in Burntwood.
Traders and representatives from local organisations gathered today (Monday 7 April) to unveil the newly improved Ryecroft Shopping Centre in Burntwood.
Dianne Clift of D Beauty & Tanning Studio, and founding member of the Ryecroft Traders Association, cut the ribbon in front of assembled guests, proudly launching the improvements.
Building work to improve the centre’s car park and public spaces started in March and came about after the local businesses formed the Ryecroft Traders’ Association to address the shopping centre’s issues and boost trade.
Dianne Clift of D Beauty & Tanning Studio and founding member of the Ryecroft Traders’ Association, said: “It’s been a huge project for us and, with help from local councillors, Burntwood Business Crew and a great team from Lichfield District Council, who helped to establish and manage the project for us, and continue to advise our newly formed traders association, it’s finally paid off. We are all overjoyed with the result and hope it helps bring more much needed business to the centre. Customers have already commented on what a big difference it has made, as they can now park safely on the refurbished car park. Thank you to everyone involved.”
The repairs were funded by Burntwood Town Council, Burntwood Business Crew (with High Street Innovation funding), Lichfield District Safer Community Partnership, and Staffordshire Local Community Fund. Local traders are also contributing to ongoing maintenance of the shopping centre’s public areas.
Work so far has included resurfacing the front car park, patch-repairing the back car park, repairing the shopping centre’s forecourt area, and upgrading and reconnecting the lighting. White car park lines are also set to be painted this week.
Jenni Coleman, Community Safety Manager at Lichfield District Council, said: “We’re really pleased with the improvements, as they make such a difference to the shopping centre. It’s fantastic how everyone has come together on this project, and shows what can be done when working in partnership for one goal. As part of Lichfield District Safer Community Partnership and Burntwood Business Crew, we proud to be involved in this scheme and hope it will make the area safer and more pleasant for traders, shoppers and residents alike.”
Rob Fitzmaurice, of Midland Plumbing Supplies and Chairman of Ryecroft Traders Association, said: “I’m over the moon. This is going to make such a difference to all of our businesses. I didn’t quite believe we could get it sorted it, and I’m so grateful to the Burtnwood Business Crew who kick-started this process and brought everyone together in the first place. It just shows what working together can do for a local community.”
David Whitehouse, Chairman of the Burntwood Business Crew, said: “This is brilliant news for Ryecroft and for Burntwood. And it’s just the first of many projects the Burntwood Business Crew is involved in. From marketing the Burntwood area better, to new signage, we’re all passionate about boosting the local area. I’d encourage anyone out there who shares our passion to get involved.”
“On behalf of the traders, I’d like once again like to thank everyone for their support in making this happen. So many people have been involved, but I’d particularly like to thank all the councillors who’ve been involved, as well as officers at Lichfield District Council including Oliver, Lizzie, Maxine and Alison. I’d also like to thank Steve Lightfoot for helping us to draft the traders association agreement, and of course all my fellow Ryecroft traders, and particularly Dianne at D Beauty & Tanning Studio, who have put in so much time and effort to see this project get off the ground. I’d also like to thank Bal at Tara Wines for donating some delicious cava to help us celebrate today’s launch!” added Rob Fitzmaurice.