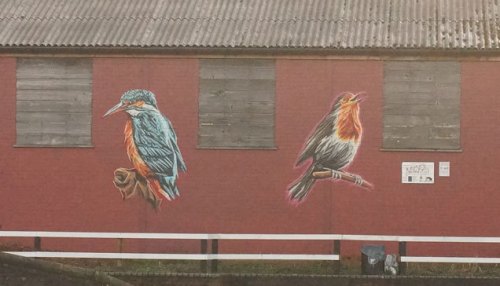 The Midlands’ historic canal network has a striking new landmark after a giant kingfisher and robin appeared on a canalside wall in Tamworth.

The giant mural was created as part of a Canal & River Trust project to transform a run-down canal junction. The Trust has been working with volunteers for over a year to breathe new life into Fazeley Junction where the Coventry Canal meets the Birmingham & Fazeley Canal.

The junction was looking a bit tired until the Trust enlisted the help of its Tamworth Towpath Taskforce group of volunteers. The team quickly got to work tidying the junction, clearing litter, removing graffiti and putting up new fences. Over time the team hope to do even more and create a canalside garden.

To complement the team’s efforts local arts group New Urban Era have now created a wildlife-inspired mural on what used to be a graffiti blighted wall. The wall, which belongs to H & G Gould Timber Merchants, has been entirely repainted and detailed paintings of a kingfisher and robin added by freelance artist Steve Edwards.

Tom Freeland, volunteer coordinator for the Canal & River Trust said; “This is the culmination of a volunteer-led project to reclaim and restore busy Fazeley Junction for the benefit of the local community.  Over the last year, our volunteers have weeded, mulched, cleared rubbish, put up a new fence and removed graffiti from the site, and this mural will really set off their efforts.  We look forward to maintaining and enhancing it as we continue our plans to create the Junction Garden and if anyone wants to help us we’d love to hear from them.”

New Urban Era founder Vic Brown said; “We are delighted to have worked with the Canal & River Trust on this Fazeley project. Not only is the mural visually pleasing but also educates visitors about the wildlife that can be seen and heard along the regions canals and rivers. We hope the project will positively inspire the general public and further organisations to engage in the arts.”

The Tamworth Towpath Taskforce is open for anybody to turn up and join in. Activities take place every other Wednesday from 10am until 1pm. No experience is necessary and all equipment is provided. For more information contact Tom Freeland on 01827 252010 or go to www.canalrivertrust.org.uk/volunteer/ways-to-volunteer/towpath-taskforce 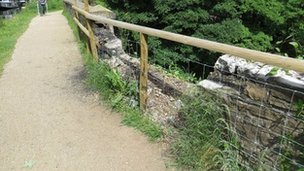 A Grade II listed aqueduct on the Monmouthshire & Brecon Canal in Pontymoile has been repaired, after vandals caused thousands of pounds of damage by hurling its 200-year old stone masonry onto the banks of the Afon Lwyd below.

Glandŵr Cymru – the Canal & River Trust in Wales – has invested £45,000 in the project, which also restored 19th century railings on either side of the aqueduct and gave engineers the chance to repair long term damage caused by growing ivy and tree roots. The work took over four weeks, having started just before Christmas.

David Viner, heritage advisor at Glandŵr Cymru, said: “We’re really pleased to get these repairs done. The damage appeared quite blatant. We suspect some larrikins hurled sections of the masonary onto the banks below, and quite a bit was carried off down the river. It just shows how much this sort of stupidity can end up costing.

“Because of the age of the aqueduct, and the Grade II listed status, it was specialist work. The location, effectively suspended above the river, also meant that quite a lot of effort had to go into getting the engineers in a safe position to do the job. The aqueduct is a very important piece of Welsh waterway heritage, so it’s great to see it back in top condition.”

The Monmouthshire & Brecon Canal is a 35-mile canal that runs through the Brecon Beacons and dates back over 200 years.