No.745 ‘Tintagel’ in 1925 after being named but before receiving a Maunsell chimney and smoke deflectors.

R.W.Urie’s express engines were the direct forerunners of Maunsell’s later ‘King Arthurs’, into which class the Urie engines were later incorporated.

Nos. 736-45 came out in 1918-19, followed by 746-55 in 1922 and 1923.  Maunsell’s No. 453 ‘King Arthur’, which appeared in 1925, was Urie’s basic design, but with a greatly improved front end, incorporating long valve travel, the merits of which had long been recognised by Churchward and the GW, but which other engineers did not adopt until many years later, Maunsell being one of the first.  The new ‘King Arthurs’ eventually totalled 54 engines, numbered 448-57 and 763-806.  They were given names associated with the legend of King Arthur and the Round Table, as were the original Urie engines at the same time.

Amongst other modifications these also received Maunsell-type chimneys and smoke deflectors at the sides of the smokebox.  It was with the ‘King Arthurs’ that trouble with exhaust smoke obscuring the driver’s vision began to be experienced to a serious extent, and it was only after extensive experiments with various types of deflectors, some fitted to the chimney itself, that the remedy was found.  Many other large-boilered designs have suffered from the same trouble, and the fitting of side wing deflectors has latterly become more or less common practice.

Under Nationalisation the engines had 30000 added to their numbers.  The early Urie engines were scrapped between 1955 and 1958, and in 1959 a start was made on the later Maunsell machines. 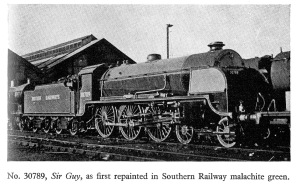 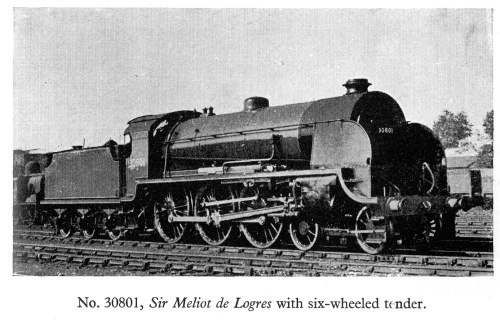