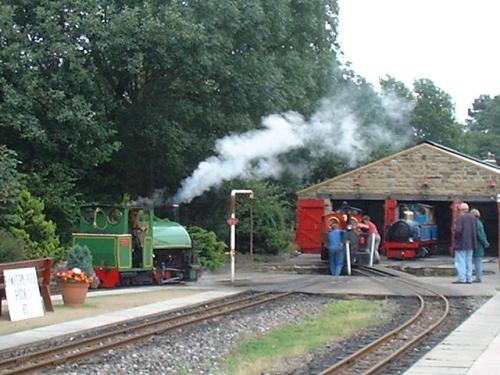 © Copyright Gordon Kneale Brooke and licensed for reuse under this Creative Commons Licence.

A Memorable Family Day Out

NEW for 2013 – Ride all day with one fare on all green and blue timetable dates!

Climb aboard our little trains for a scenic journey along our 15” narrow-gauge rail through the beautiful South Pennine foothills to our Shelley terminus where you can enjoy the panoramic views of the surrounding area.

Visit the Shelley station Tea Room for selections of seasonal refreshments. Children can play in the outdoor play area and on a summers day enjoy our large picnic area.

Upon returning to Clayton West passengers can take pleasure in the many facilities available to them. The outdoor play area is ideal for children to ‘let off some steam’ whilst the adults browse our extensive shop. The Café serves hot and cold seasonal food and drink whenever the Railway is open.

We hold many special events throughout the year; take a look through our website and see what’s happening soon at the KLR! 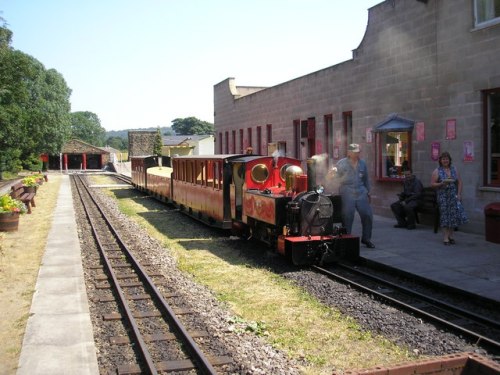 This narrow-gauge steam-hauled railway runs for about four miles from Clayton West to Shelley, where, unfortunately, there is no connection to the National Rail tracks adjacent, which could give a link into Huddersfield.  © Copyright Dr Neil Clifton and licensed for reuse under this Creative Commons Licence.

The Kirklees Light Railway is a 3.5-mile (5.6 km) long 15 in (381 mm) gauge minimum gauge railway in Kirklees metropolitan borough, West Yorkshire first opened in October 1991. It runs along the trackbed of the Lancashire & Yorkshire Railway’s branch line from the village of Clayton West to Clayton West Junction near Shepley on the Penistone Line from Huddersfield to Penistone.

The Lancashire and Yorkshire Railway opened their branch line from Clayton West Junction to Clayton West on 1 September 1879. The branch was built with bridges, tunnels and earthworks suitable for a double line, but only one line was laid. The line survived the Beeching cuts (in large part thanks to the mineral traffic generated by the collieries at the terminus and Skelmanthorpe) but was not adopted by the West Yorkshire Passenger Transport Executive unlike nearly all other passenger lines in West Yorkshire and so closed on 24 January 1983.

Construction of the narrow gauge railway started in midsummer 1990, following a joint application for a Light Railway Order between Kirklees Council and the Kirklees Light Railway Company on 22 February 1989. Construction was aided significantly by the amount of redundant materials available from a number of collieries in the area which were slowly beginning to end their mining operations. The Light Railway Order was finally granted on 27 September 1991. The line was originally 1 mile (1.6 km) in length running from Clayton West station to a specially constructed halt called Cuckoos Nest. This name is historic to 15 inch gauge railways as a station on the Eaton Hall Railway, near Chester, built by Sir Arthur Heywood bore the name. Trains to Cuckoo’s Nest commenced running on Saturday 19 October 1991. It was extended to Skelmanthorpe in 1992 and again to a station at Shelley in 1997 with a grant from ERDF for the regeneration of coal mining areas.

The journey gives fine views of the Grade II listed Emley Moor Radio Mast, passes through the ancient woodland of Blacker Wood which is mentioned in the Domesday Book and includes a trip through the 511 yards (467 m) Shelley Woodhouse Tunnel, the longest tunnel on any 15 in (381 mm) gauge line in Britain.

Skelmanthorpe Station – Seen from a train on the Kirklees Light Railway.

© Copyright Christine Johnstone and licensed for reuse under this Creative Commons Licence.