Not to be confused with West Highland Line.

Coming out of Fort William beyond Spean Bridge and on to Tulloch the railway is always close to the cascading River Spean.  Here, deep down in the Monessie Gorge, the dark peaty waters rush on their rocky way towards the sea, whilst the morning train from Fort William to Glasgow storms its way up the bank towards Tulloch, where both engines will take water.  On August Bank Holiday Monday, 1953, there are still signs of LNER ownership as a very dirty ‘K1’ No. 62012 leads a cleanish ‘Glen Mamie’ southwards.  (P.B.Whitehouse

The West Highland Railway was one of the last main lines to be built in Scotland. It is one of the most scenic railway lines in Britain, linking Fort William on the west coast to Glasgow. It was originally operated by the North British Railway.

Construction was authorised in 1889, with the Act of Parliament being passed on 12 August and construction starting 23 October. The following year the branch line to Banavie Pier was authorised. The line was publicly opened to Fort William on 7 August 1894.

The West Highland Railway begins at Craigendoran Junction heading towards Garelochhead and emerging alongside the northwesterly shores of Loch Lomond. Significant points on the journey include Crianlarich, an important Highland junction of both road and rail where the line crosses – and is linked to – the Callander and Oban Railway and Tyndrum, the smallest place in Scotland to boast two railway stations. After Tyndrum, the line climbs onto Rannoch Moor. The station at Corrour on the moor is one of the most remote stations in Britain. Carrying on northwards, the final stop before Fort William is Spean Bridge. A branch line was constructed from Fort William to Banavie Pier at the southern end of the Caledonian Canal.

In 1953 there were still some solid reminders of the North British days at Fort William, though not many;the station signals had not been changed to upper Quadrants, the odd NB 0-6-0 still worked the occasional goods, and the ‘Glens’ still made rare appearances on the passenger turns from Glasgow Eastfield.  Such was the situation on August Bank Holiday for No. 62482 ‘Glen Mamie’ had come down on the afternoon train on the Saturday and was returning on the morning Glasgow train on the Monday.  (P.B.Whitehouse

Engineman’s eye view from the cab of  ‘Glen Loy’ as she climbs up beyond the Monessie Gorge towards the hills on her way home to Glasgow.  (P.B.Whitehouse 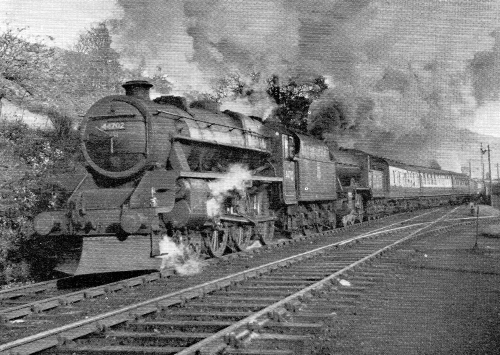 By November, the West Highland line settles down in earnest to think about winter, and this means fitting some of the engines with small snow ploughs.  LMS Class ‘5’ 4-6-0 No. 44702 piloting a ‘K2/2’ leaves Arrochar & Tarbet with the morning passenger train for Glasgow in November, 1957.  (W.A.Camwell 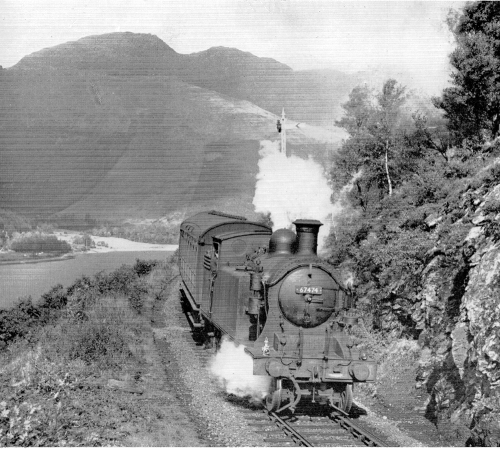 It was not until 1959 that the last regular West Highland passenger train allocated to a North British locomotive disappeared.  This was the push-and-pull service between Craigendoran Junction and Arrochar, on the banks of Loch Lomond, later operated by a railbus.  With Loch Long and the Cobbler behind her, ‘C15’ class 4-4-2 tank No. 67474 of 1911 heads the 12.50pm from Arrochar.  (W.J.V.Anderson

Perhaps the most exciting filming ever done for the BBC ‘Railway Roundabout’ programme was that on the Glasgow to Fort William section of the Scottish Region during May, 1959.  To bring back some of the atmosphere of the old West Highland the General Manager generously agreed to run two ‘Glens’ in tandem on the regular 5.45am train from Glasgow and the 2.56pm return journey.  Bothe engines, Nos. 62496 ‘Glen Loy’ and 62471 ‘Glen Falloch’, performed well, showing no signs of faltering on the heavy banks with all but 300 tons hanging on behind them.  Clean as new pins, steaming well and going all-out, the two old ladies near the County March summit on the Horseshoe bend, during the evening of the first day’s filming.  (W.J.V.Anderson