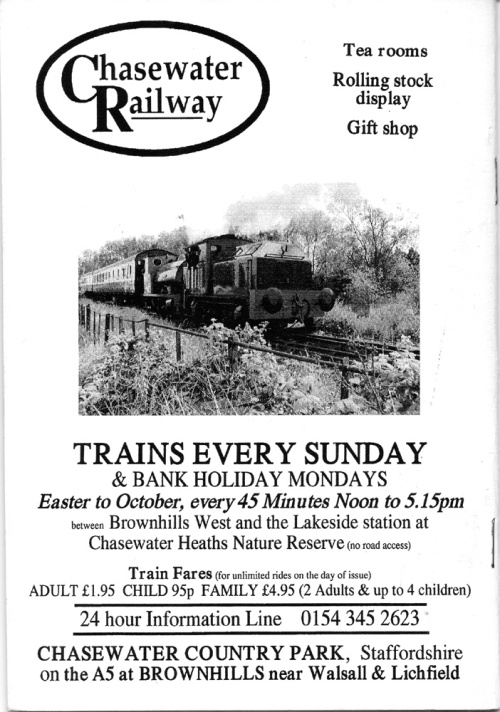 From the Board Room

The temperature is becoming decidedly warmer.  With compulsory purchase orders affecting both ends of our line, there is an entirely understandable uncertainty, and indeed nervousness, among some of our members.  Ironically, progress in relaying track beyond Norton Lakeside Station exceeded all expectations and broke all records during January and February, and would certainly merit an entry in the Chasewater Railway’s Guinness Book of Records!

In the winter edition of Chasewater News, I attempted to bring members right up-to-date on current developments and referred to the fact that the situation is changing almost by the minute.  This continues to be the case.

For reasons entirely outside the Company’s control, Lichfield DC have deferred our intended presentation to the Chasewater Sub-Committee.  It would probably not be too wide of the mark to suggest that the delayed submission of details for the proposed commercial development of the South Shore has made it difficult for the Council to see us before that submission has been made.  However, in anticipation of our presentation, Council Officers have reviewed our current Policy Statement (which is now being updated by the day) and have identified a number of aspects, which, it is suggested, may be helpful to our cause, when we eventually meet the Sub-Committee.

In the meantime, we are maintaining an appropriate dialogue with the Council’s Officers on a wide range of issues including, if it need be said, the BNRR and the Burntwood Bypass.

The relevant purchase order (CPO) and side roads order (SRO) were both confirmed by the Secretary of State on 22nd January, 1998, resulting in considerable attention by the press and media.  The CPO becomes effective after 6 weeks assuming no successful challenge on legal grounds in the Courts.  Presumably, notices to treat (which start the formal compensation process) will follow shortly after the six-week period has elapsed.

Currently, following discussions with both the District Valuer and Midlands Expressway Ltd (MEL), we are awaiting a decision regarding the appointment of an independent railway consultant with responsibility for carrying out a feasibility study on alternative sites and layouts for the replacement of our facilities at Brownhills West.  A number of members have spent time and effort on designing layouts, but it may well prove impossible to accommodate everything that we need within the confines of our existing leased area.  An independent feasibility study will confirm the situation one way or another.

The CPO and SRO for the bypass have been submitted by Staffordshire County Council to the Secretary of State for confirmation and, as mentioned in the previous Chasewater News, we have submitted a formal objection thereto.  Discussions are proceeding with the County Council, who have drawn up revised plans which ensure that, subject to planning permission, the Railway can be accommodated up to a point just short of Chasetown (Church Street).  We continue to be hopeful that a public enquiry will be unnecessary and that the amended scheme can form the basis of a formal agreement between the Company and the county Council.

Through the good offices of one of our members, the remaining track from IMI Witton was converted to considerable advantage for the Railway during mid-February, and immediately made a significant contribution to the track relaying programme beyond Norton Lakeside.  I would like to take this opportunity to thank IMI for their generosity in making this track available to us.

We have a full programme ahead of us during 1998, both in relation to running trains and ‘behind the scenes’ in dealing with the road schemes.  Despite the temptation to descend into unhelpful and negative doom and gloom, I hope members will share my view that – given the inevitability of the road schemes – we have a massive window of opportunity opening up before us.  It is an opportunity which we must not fail to maximise.

From Norton Lakeside towards Chasewater Heaths?