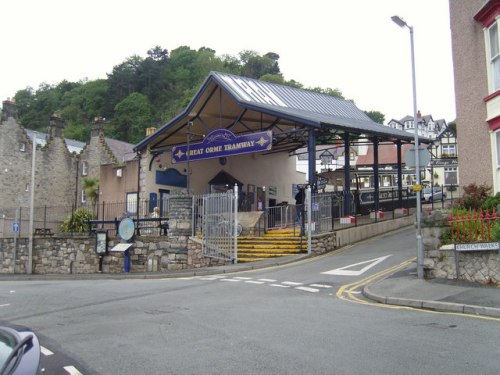 Lower terminus of Great Orme Tramway.  © Copyright Duncan and Gareth Alderson and licensed for reuse under this Creative Commons Licence.

This is Great Britain’s only remaining cable operated street tramway and one of only three surviving in the world. It takes passengers from Llandudno Victoria Station to just below the summit of the Great Orme headland. Operation of the tramway differs from the better-known San Francisco system in that it is not a cable car but rather a street running funicular (similar to the Lisbon system), where the cars are permanently fixed to the cable, and are stopped and started by stopping and starting the cable. As one car is ascending, the other is descending, and they meet midway. The tramway was opened on two stages: the lower section on 31 July 1902 and the upper on 8 July 1903. The two sections operate independently, with two cars on each section which are mechanically separate.

The tramway starts in the town and goes all the way to the summit of the Great Orme. This photo is about half way back down, where the tram re enters the built up areas.  © Copyright Paul Allison and licensed for reuse under this Creative Commons Licence.

The lower section is built on or alongside the public road and has gradients as steep as 1 in 3.8. The cable on this section lies below the road surface in a conduit between the rails. The bottom half of the section is single track, but above the passing loop it has interlaced double track. In comparison, the upper section is less steep, with a maximum gradient of 1 in 10, and is single track apart from a short double track passing loop equipped with Abt type points to accommodate the cable. The original power house, at the Halfway station between the lower and upper sections, was equipped with winding gear powered by steam from coke-fired boilers. This was replaced in 1958 by electrically powered apparatus. In 2001, the entire Halfway station, its control room and its power plant were completely rebuilt and re-equipped.

This shows the rails at the lower section passing loop of the tramway. The cars are permanently attached to the cable, which runs beneath the slot in the centre rail. The overhead wire and trolley are used only for communication purposes and do not supply electrical power.  © Copyright Dr Neil Clifton and licensed for reuse under this Creative Commons Licence.

The tramway uses four tramcars, in service since 1902. An overhead wire telegraph was formerly used for communication between the tram and the engineer-driver in charge of winding the drum, and has been replaced with an induction-loop radio-control system.

The tramway has three main stations, the lower station named “Victoria” after the hotel that formerly occupied the station site, the middle one aptly named ‘Halfway’, and the Great Orme Summit station. Passengers must change trams at the Halfway station.

The Summit Complex sits at the top of the Great Orme in Llandudno. The building was originally known as “the Telegraph Inn.” The Complex houses a gift shop, cafe bars and restaurants. The Summit can be reached by tramway, cable car and by road. During the World War two the hotel was used for signalling purposes and became RAF Great Orme Radar Station.  © Copyright john driscoll and licensed for reuse under this Creative Commons Licence. 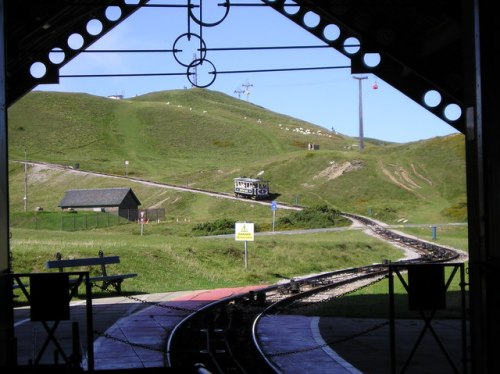 Taken from the tram barn at the halfway station.  © Copyright Chris Andrews and licensed for reuse under this Creative Commons Licence.

So much to see – The view from the Great Orme’s 679ft (207m) summit are breathtaking- from Snowdonia and Anglesey, all the way to to the Isle of Man, Blackpool and the Lake District.

So much to discover – The Great Orme is a wonderland of nature and history. Look out for the two varieties of butterfly which are unique to the area, the wild Kashmir goats and the rare flowers.

The Great Orme Tramway was built in 1902 to take passengers from Llandudno to and from the summit of the Great Orme. It is Britain’s only remaining cable operated street tramway and one of only three surviving in the world.  The tramway uses four tramcars, all of which have been in service since 1902.   © Copyright David Dixon and licensed for reuse under this Creative Commons Licence.