Steam Locomotives of a Leisurely Era

No. 644 at Strawberry Hill in 1921.  The brass beading to the splashers was latterly removed from most of the engines

First appearing in the fiftieth year of Queen Victoria’s reign, the engines of this class were always known as ‘Jubilees’.

The 0-4-2 tender was new to the LSWR at this period although it had been found previously on the neighbouring LBSCR and a few other lines, notably the Great Northern and the Glasgow and South Western.  The new engines were intended, and were in fact used, for all manner of duties, except top-link expresses, for which they were hardly suited.  It is recorded, however, that one of them did on one occasion in an emergency work the famous 11 o’clock West of England from Waterloo (later known as the Atlantic Coast Express). 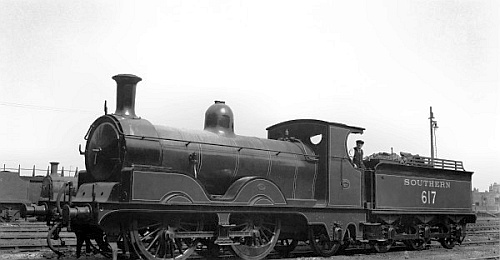 They all gradually lost their Adams stove-pipe chimneys in favour of the Drummond pattern, and a few of them latterly carried Drummond type boilers.  Most of the first batch were originally given old second-hand tenders of Beattie origin, later replaced by newer ones from scrapped engines of other classes.  A few were latterly dual fitted with both Westinghouse and vacuum brakes.  Otherwise the class remained unaltered throughout its existence.  No. 555 had the distinction of hauling Queen Victoria’s funeral train from Gosport to Fareham on 2nd February, 1901, where the train was handed over to the LBSCR. 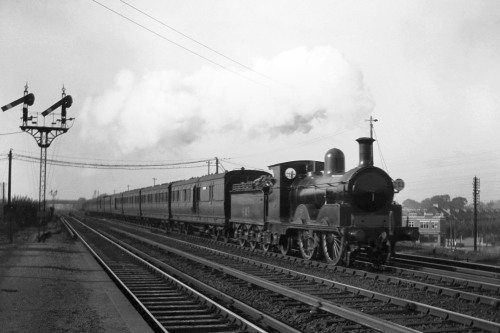