One of the firm’s 14″ saddle tanks, weighing 27 tons in working order, it was delivered new to the Kent Electric Power Company at Littlebrook Power Station, near Dartford on 31 July 1946. Number 2 was later moved to Croydon “A” Power Station during the mid 1950s. There it shunted coal wagons until purchased privately for preservation in November 1972. During July 1973 it was moved by road to Alresford, becoming the first locomotive to arrive at the new Mid Hants Railway preservation scheme. It received minor repairs, but with boiler repairs also needed it remained a static exhibit. In May 1980 number 2 was named “Hampshire” immediately prior to a period of loan to Tucktonia, a model village in Christchurch, Dorset. The locomotive returned to the Mid Hants Railway in autumn 1982 and later moved on to spend several years at the Avon Valley Railway at Bitton, latterly on display at Warmley. It is basically complete but suffered some vandalism, and was eventually purchased privately by three members of the same family for restoration to working order at the Foxfield Railway. Number 2 arrived at Foxfield, complete with a graffiti livery, on 23 September 2003. 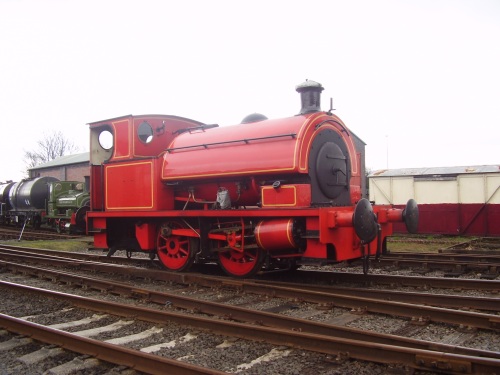 Pic by oakparkrunner – with many thanks.