The Derwent Valley Light Railway (DVLR) (also known as The Blackberry Line) was a privately-owned standard-gauge railway running from Layerthorpe on the outskirts of York to Cliffe Common near Selby in North Yorkshire, England. It opened in 1913, and closed in sections between 1965 and 1981. Between 1977 and 1979, passenger steam trains operated between Layerthorpe and Dunnington — the entire length of track at that time. In 1993 a small section was re-opened as part of the Yorkshire Museum of Farming at Murton.

The line gained its nickname of The Blackberry Line in the days when it used to transport blackberries to markets in Yorkshire and London.

The south end of the railway, from Wheldrake to Cliffe Common, was opened on October 29, 1912, with the remainder of the line opening on July 19, 1913. Although it was constructed primarily as a freight line, passenger trains were introduced from 1913, and during World War 1 it was used as a diversionary route by the North Eastern Railway between York and Selby. Passenger services ended in 1926, though freight traffic prospered through World War ll.

In 1964, British Railways closed the Selby to Driffield Line, meaning that the junction at Cliffe Common became redundant. With the connection to Selby now gone, the DVLR was left isolated at its southern end. The line was subsequently run from the Layerthorpe end but traffic generated by the southern section of the track was light so the decision was taken to close the line between Wheldrake and Cliffe Common in 1965. The section between Wheldrake and Elvington followed in 1968. Elvington was closed in 1973, leaving only approximately 4 miles (6.4 km) of track between Layerthorpe and Dunnington on the outskirts of York.

In 1976, the owners of the railway decided to operate steam trains between Layerthorpe and Dunnington, which was the entire length of the line at that time. A regular summer service started in 1977, with J72 0-6-0T locomotive number 69023 Joem (now preserved at the North Yorkshire Moors Railway) operating the services. By 1979, there were not enough passengers to justify continuing and the service ceased. The railway continued to carry occasional freight trains to Dunnington until 1981 when the grain driers at Dunnington closed and the last major source of freight for the line was gone. On top of that the railway was in desperate need a major overhaul with the majority of the rails and buildings still being the 1913 originals. However, the owners decided that the lack of demand for freight failed to justify any plan of action other than to close the line down. The last train ran on September 27, 1981. 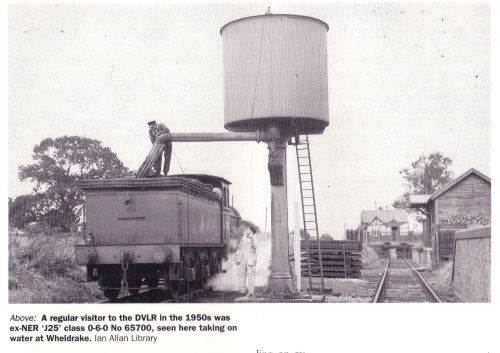 Until 1990, a small preservation group, the Great Yorkshire Preservation Society, was originally based at Starbeck near Harrogate. When this closed, the society members relocated to the Yorkshire Museum of Farming, and started to rebuild approximately 0.75 miles (1.21 km) of track towards York, including the section under the York by-pass. A new station was constructed using the original station buildings from Wheldrake, and the railway re-opened in 1993.

The line now runs a mixture of 6 diesel and 1 steam locomotive on Sundays and bank holidays.

The track-bed from Layerthorpe to Osbaldwick, along with part of the former Foss Islands Branch Line in York, has been converted to afoot and cycle path.  Whilst future extension of the line towards Osbaldwick may be possible, as of 2010 there are still no formal plans for this. 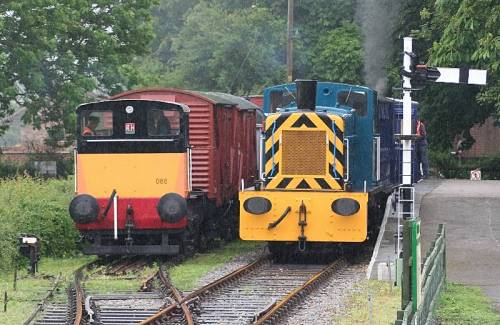 This entry was posted in Some Early Lines and tagged Derwent Valley Light Railway, DVLR, from Layerthorpe on the outskirts of York to Cliffe Common near Selby in North Yorkshire, Yorkshire Museum of Farming. Bookmark the permalink.