Work on the railway is still progressing well and the number of volunteers has increased to the extent that even on our busiest day, Transport Scene, there were still people working on the new extension, and on carriage restoration.  As if to reflect the amount of work going on, even this issue of the magazine contains a few extra pages.  If all goes well, the Railway Inspector will be asked to pass off the line for passenger running to the causeway early next year.  If YOU would like to help on the track or in any other department on the railway, please come along – you will be most welcome.

No.4 Asbestos – This loco is almost ready to return to traffic on a regular basis.  A couple of steam tests have been carried out, and a number of minor leaks corrected.  A small amount of finishing off is now required, such as fitting of the new saddle tank balance pipe and the extension of the buzzer wiring to the front buffer beam.

No.5 Sentinel – This has remained the only steam loco in service and has run well.  The problem of rust from the superheater blocking valves has been kept under control by regular inspections and cleaning.  The loco will need to be taken out of service before Christmas for its 5 yearly major boiler examination.

This loco has passed its hydraulic test, and boiler fittings and pipework are now being fitted.  The boiler has been lagged, the cladding sheets fitted and the tank lowered into position.  Work is now being carried out to align the tank mounting brackets.

S100 – Work is continuing on the hornguides, and new fitted bolts have been made to secure them to the frames following machining.  The boiler has been unloaded from the flat wagon and is now in the loco shed yard where the shell has been cleaned and painted.

The boiler from S100 is lowered into its new position in the loco shed yard.

Fowler – This loco is still running well and is in regular use.  Work has now begun on machining the various parts required to fit the loco for working the vacuum brakes on our passenger stock.

DL7 – Work is in progress on cleaning the cylinder heads and re-seating their valves ready for the engine rebuild.

No.21 Diesel – Work has concentrated on the two spare engines for this loco, the best of which may shortly be refitted to the frames

Smith Rodley Crane – This vehicle has remained out of use.

In the early part of this year, a poster appeared on the notice board at work saying ‘Bass Community Awards’ open to employees who are involved with a charitable organisation.  Now being a volunteer on the permanent way gang at Chasewater, and an employee of Bass, Mitchells & Butlers, both conditions were met, so I applied for an application form and sent it to the address stated on the poster.

A week later the application form appeared on my bench at work, and, after a lot of thought, I filled it in and with it wrote a potted history of the CLR.

In it I told briefly of the construction of the railway in 1860, and of how Chasewater Light Railway has been at Chasewater for 25 years, and of our plans to relay the track across the causeway and around the far side of the lake.  To do this we need money to buy materials to replace badly rotted sleepers, and rail which has staggered joints or had been criminally taken away for scrap.  I also wrote of what had already been achieved – the re-laying of the track to extend the running line, the repairs to Willow Vale bridge handrails to allow passenger trains to run over it, and finally, the passing of the extension by the Railway Inspectorate for passenger carrying trains.  The application was posted and almost forgotten about, until, on 24th April, a letter came through the door. I opened it up and read:

‘Further to your recent application for consideration under the above scheme, I am pleased to advise you that your organisation, Chasewater Light Railway & Museum Co. has been successful and has been awarded £300.  Could you please contact me on the above telephone number in order that we can discuss details of the cheque presentation.’

I telephoned the said number and arranged a date for the presentation at 7.00pm on Wednesday 27th May.  After a lot of thought and discussion, it was decided to use the £300 award to pay for the transport of redundant track materials from Hams Hall Power Station on 26th May.

Chris Chivers, Andy Clegg, Chris Hatton, Adrian Hall and myself, with ‘DJ’ Geoff running a shuttle service in his van were the crew who went to Hams Hall to load the trackwork, while Steve Organ, Arthur Edwards and others stayed at Chasewater to receive and unload the lorries.  Unfortunately, things did not run to plan, and what was supposed to be the first load at 9.00am departure from Hams Hall was in fact 6.30pm.  The second load arrived late afternoon on the 27th – the day of the presentation.

As it happened, this worked in our favour as Janice Clarke, PR Officer for Bass, and her photographer were able to take a picture  of the last load, unloaded with Yours Truly presenting the cheque to Chris Chivers, while Steve, Arthur and Chris Hatton posed in the background.  (Working for Bass is just like working at Chasewater – if you want anything done, you have to do it yourself!).  The picture and story were released to the press and appeared in the ‘Express and Star’ on 15th June. 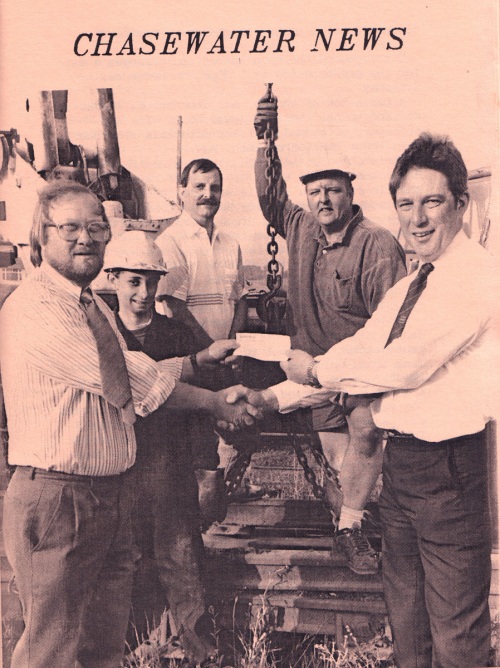 What we recovered from Hams Hall were: 4 sets of points, a rail drilling machine, 1 buffer stop complete, a number of point timbers, 2 point levers, some sleepers, rail, chairs and numerous other materials.

A small buffet was given at Brownhills West on the occasion, and I would like to thank Bass personally for their award of £300, and also everyone who took time to turn up on the 27th.

The Bass awards are an annual event, so if anyone has a suggestion for next year, please let me know.