Sid Browne worked on the railways for nearly fifty years and had many anecdotes recalling his long experience.  Here is another tale, as remembered by his grandson.

After working at Brownhills for some time, Sid was promoted and transferred toMonument Lane in Birmingham.  This presented quite a problem, as Sid still lived in Brownhills.  Sid had to travel by push bile toNew Streeteach morning, and back again at night.

One winter’s morning, with the roads covered in snow and a force eight gale blowing, Sid set off for work.  Unfortunately, he arrived just four minutes late.  He hurried down onto the platform to catch the train toMonument Lane, confident that the Inspector would have held the train long enough for Sid to catch it.

The platform, however, was empty except for the Inspector, Mr. Smith.

The following spring, Sid was guard on an evening train from Coventry to New Street.  The train arrived at Stechford, and there, on the platform was Inspector Smith.  As the train was the last one of the day, Smith wanted to catch a lift back toMonument Lane, where he could ‘book off’ for the night.  Smith climbed into the brake end of the train.

“And where do you think you’re going?” asked Sid.

“Not on this train you’re not”

“But it’s the last train”

“That’s right, but some of us have got long memories, now get off!”

“Right!” said Mr. Smith “I’ll go and ride on the engine with the driver!”

“Oh no you won’t” said the fireman, who had come back down the train to see what the delay was.  “If you even touch that engine I’ll unhook it and go ‘light engine’ toMonument Lane.”

Absolutely furious, Inspector Smith was left standing on the station with a long walk ahead of him. 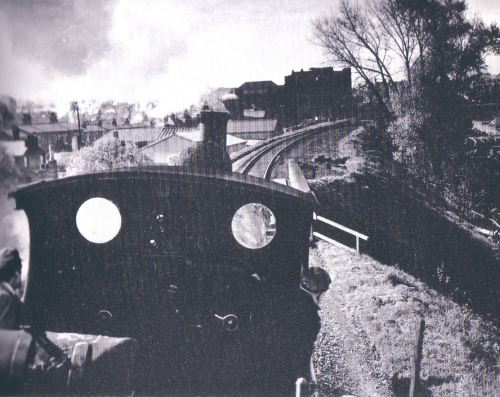 Photo – An old Midland Railway Class ‘2F’ 0-6-0 nears the end of the line on the three mile long branch from Monument Lane to Harborne, Birmingham, in July, 1961. –Birmingham Post

There are two morals to this tale:

Working atMonument Lane did have its benefits.  In particular, excursions could prove very lucrative, as being invariably overcrowded, children had to sit on parent’s laps all the way.  Sid made sure that the doors on one coach were locked as it arrived atNew Street.  Once the rest of the train was full, Sid auctioned off the remaining seats to the highest bidder, earning more than a week’s pay.

Moral:  A fool and his money are soon parted.

Crime does not pay, unless you avoid being caught!