The Wantage Tramway plus ‘Shannon’

The Wantage Tramway was a two mile tram way which carried passengers and freight between the Oxfordshire town of Wantage and Wantage Road Station on the Great Western main Line.

Formed in 1873 to link Wantage Road station with its terminus at Mill Street, Wantage the line was cheaply built parallel to what was then the Besselsleigh Turnpike, and now the A338. 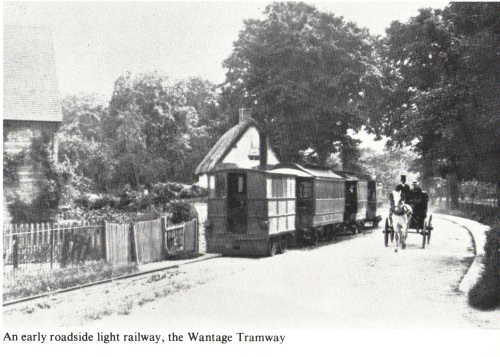 The line was opened for goods on 1 October 1875, and to passengers on 11 October.  The tramway junction was to the east of Wantage Road station; interchange passengers walked under the bridge to reach the tramway yard, where the westernmost siding (parallel to the road) was reserved for passenger tramcars. Built as a standard gauge line, and first run using horse drawn rolling stock, the line became the first to adopt mechanical traction when a steam-powered tramcar was tried out in the summer of 1875, entering regular service from 1 August 1876. In November that year the first steam locomotive arrived for trials, and the line was converted to steam traction in the late 1870s. For most of its operation the line was well used and profitable but the advent of popular road transport saw a steady decline in passengers and freight. The tramway closed to passengers on 1 August 1925, and to goods on 22 December 1945.

“Shannon” was one of two engines owned by the Wantage Tramway Co. at the time the line was closed and, in view of the engine’s historic interest and the railway association with Wantage, “Shannon” was acquired by the G.W.R. Co. for exhibition at its home station, Wantage Road.

The engine was built by George England & Co. of Hatcham Ironworks in 1857 for the Sandy and Potton Railway.  Later it came into the hands of the LNWR, who used it for shunting in Crewe works, but it was tried out for a short time in 1863 on the Cromford and High Peak, where it does not seem to have been a success.  In 1878 it was sold to the Wantage Tramway, where it remained for the rest of its working life.  The line was completely closed in December, 1945, and in 1946 the Great Western Railway bought the locomotive and renovated it for preservation.  It stood for a while under an awning on the platform of Wantage Road station. 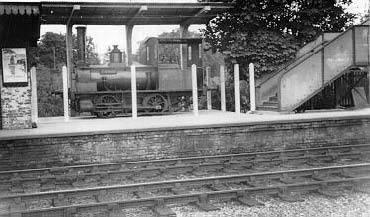 In shelter at Wantage Rd Station

On the LNWR it had been No.1863, and it became No.5 on the Wantage Line.  On restoration the original name ‘Shannon’, which it had borne on the Sandy and Potton Railway, was given back to it, although it had never carried a name whilst in service on the Wantage, or on its acquisition by the LNWR.

No. 5 ‘Shannon’ is part of the country’s National Collection, currently on loan to Didcot Railway Centre, where she is on static display.  There are only 5 remaining George England engines today and ‘Shannon’ is the only standard gauge one. The remaining four are all narrow gauge and were built for, and are still with, the Festiniog railway in North Wales, where two of them are still operational.