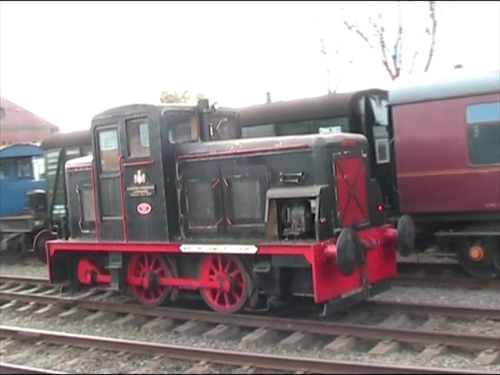 Built with a Gardner type 6L3 engine of 150 brake horse-power and fitted with Wilson-Drewry transmission.  The original livery was middle green with unusual dark blue buffer beams.  The loco was delivered new to Marston, Thompson and Evershed brewery, Burton-on-Trent, February 1955.

Rail traffic declined and the brewery went over to road traffic only and the loco (No.4) was sold to Bristol Mechanical Coal Co. Ltd., going to their Filton Coal Concentration Depot c12/1966.  New, the loco had cost £8,918 and its subsequent resale price was £2,925.

By March 1990 the loco reappeared at Marston’s, having been brought back for display.

Later, No.4 went to Barrow Hill Roundhouse, Staveley, Derbyshire and saw a little use there before arriving at Chasewater.