A School Visit to Chasewater Railway

A School Visit to Chasewater Railway

Tuesday 9th November was a bitterly cold day and we were expecting a school party from Croft  Community School in Walsall to pay us a visit – we just hoped that they would come suitably dressed.  We needn’t have worried.  There are enough parts of Chasewater Railway with heating these days to make a visit, even in such weather, a very enjoyable experience.  The station buffet has its coal fire, the carriages on the train are heated, the Heritage Centre is a bit cooler and the Museum is always at its controlled temperature.

The visit started with Gary giving a talk about wartime experiences and conditions, such as food rationing, and this was followed by the first train ride to Chasetown, Church Street, where the children braved the cold to watch the loco run round and Laurence coupling-up.

I so nearly caught Lol working – but somehow he moved too quickly!

Then back on the train and back to Brownhills West, where Lynda had put on a first-class buffet of food such as would have been eaten during war-time.

With lunch finished, it was into the shop for a browse and maybe spending a little pocket money, then over to the Heritage Centre.  Once inside, the group was split into two, half looking around the old rolling stock and the other half going into the Museum for a bit of a film show and a look at the smaller exhibits.  With the clock approaching two it was time for the final ride on the train – this time with a short quiz to occupy them – trying to keep their attention on the ride and surroundings.

Back at Brownhills West it was time to pack up and get back on the mini-buses.  The staff and children seemed to have enjoyed their day at Chasewater Railway, the railway staff certainly did – the school would be welcomed back any time.

Thank you school and thanks to the staff at the railway, Laurence and Ken on the engine, Gary the guard, Gary and Lynda in the buffet and Godfrey with yours truly all over the place – a train ride either side of the Heritage Centre visit! 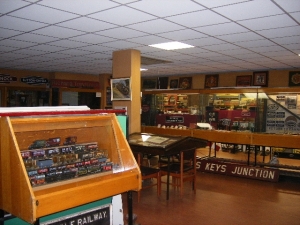 Any school thinking of a day out on an evacuation train or whatever – we are very flexible – could do worse than contact Chasewater Railway to see what we have to offer.